So I wrote a big long post about Halloween for you guys, but after reading it a couple of times, I decided that it sucked, so instead i'm just going to share some highlights:

*I accidentally sewed my daughter's costume sleeve together while trying to fix a small tear.
*My accident prone son ran face first into a highly visible, parked SUV and it was funny as hell (don't worry, he's fine)
*Peanut told everyone who answered the door that he liked their stairs. That went well.
*Peanut also shouted out, "WHOA this place smells like dog crap" as we walked up to someone's porch. I smiled and said, "My nephew makes such a great Woody, doesn't he?"
*Someone actually handed out Mexican lollipops with chili powder on the stick, that my 6 year old promptly puked up on the way home.
*Half of the candy we got was stale and I chipped a tooth on a petrified Starburst. Thank you to the cheap bastard who passed out last year's leftovers.
*I want to be the cool house in the neighbor and since i'm too lazy to decorate, i'm handing out Melatonin instead of candy. You're welcome parents!


Warning: If you see these children please proceed with caution.
They are armed with a crazy mother. 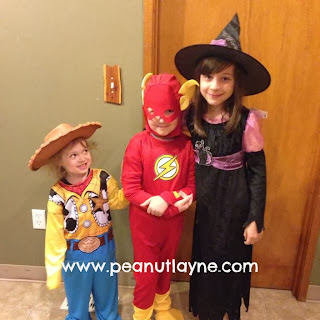 Enough about Halloween since it's so last year.  I went on two dates with the hubby last weekend. TWO! We went to see Cut Copy in Portland and it was pretty awesome, except that I felt really old. Maybe that's because I am old, but we made it to the front row and I sort of slumped over the railing and used my floppy boobs to hold me up and then silently prayed for it to end so I could hurry home and slather some Icy Hot on my aching knees. Paaaarty animal!   Then on Sunday we went on a lunch cruise, and that was really fun, but i'll post more about that on a different post.


Here we are at Cut Copy. Everyone else looked all young and hipster and I
looked like I robbed an Old Navy store just moments before the show. 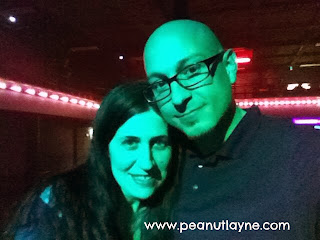 The other day I reached an all time low when I posted this as my Facebook status:

"My van has a pukey towel in it, a stool sample for the dog's vet appt, and Peanut's shoes with poo stuck on the soles. And I wonder why I have no friends. Oh and i'm wearing granny panties with leggings and an overnight maxi just in case you still thought I had a shred of friend appeal left."

Speaking of friends, I honestly don't have that many.  I know it's totally shocking that someone with my optimistic, sunshiney personality wouldn't be drowning in friends, isn't it? Over the years, i've found it really difficult to maintain friendships and juggle five kids and a husband and all that fun stuff that makes life so magical.  I'm busy, or tired, or just feel like a big blob of poop and don't want to leave my couch, etc. Eventually people just stop calling and I totally get it.  I wouldn't really want to keep trying with someone like me either.  I'm kind of weird. I talk too much and don't know when to stop.  On Weds our 9 year old had her end of the season soccer party and I got seated across from the one and only family in Portland who goes to church. I know, right?  We start talking and somehow the subject of customer service jobs comes up and I briefly worked as a customer service rep for a major credit card company. I'm telling her a story about my first call and of course it has the word asshole in it. I can't help it. It's an integral part of the story, I swear.  As soon as I said it, my husband nudged me under the table. This is his, "Shut up honey" nudge but I just had to keep talking and talking and talking.  I noticed at the end of the night she was programming all of the other mom's phone numbers into her phone, but I got skipped. I just had to tell the asshole story! Until they come up with invisible duct tape, i'm most likely going to remain friendless.

Yesterday I sat on the couch watching Spongebob with the kids while wearing fugly PJ's without a bra, unbrushed hair and teeth, and eating honey BBQ chicken strips as if I were trying to set a new world record, when I got a text from my hubby that one of our mutual friends (but mostly my hubby's friend cause remember I don't really have any) who works on a very popular TV show, is also working on a movie set with a very famous actress (I wont say which one but you've definitely heard of her).  Our friend went out with super famous actress last night and they sang karaoke and at first I felt a little bit jealous like, "Wow, so you mean people actually live in a world that doesn't include washing numerous loads of mismatched towels drenched in dog pee or catching kid puke with a single Taco Bell napkin in the van (that actually happened this week)?  But seriously, I know I have a lot to be thankful for (like my daughter's detention getting cancelled so I didn't have to sit and wait for her in the parking lot), and that things could always be a lot worse (I could be pregnant again).