If I were a YouTube star or a Facebook live person, I'd start this off with "Hey guys" but since I'm not a star, I'll just keep on typing. I have several new blog posts to share with y'all (I know, it's only been a million years since I posted and we actually don't even say y'all here in Oregon, but I've always wanted to say that) but then I thought, "Oh no, no, no, they'd MUCH rather hear a graphic, disgusting, TMI, description of what went down this week/evening, so here goes! It all started last Saturday night. We took the kids to a popular, crowded pizza place (I could just stop right there and end my story since crowds and people, both kinda disgust me, but that's not even the disgusting part of my story, so I'll keep going). The kids were touching EVERYTHING in the restaurant and the arcade (except for their overpriced food of course). I'm talking they were pounding and pressing on buttons, knobs, dirty, sticky, slimy steering wheels that doubled as a Kleenex, etc, ALL things that a million grubby little hands touch on any given day. So yeah, there were my darling "healthy" kids happily playing, touching, putting their hands in mouth, more touching, grabbing whatever drink was sitting on our table and drinking it (not knowing if it belonged to them or not), probably picking up the chewed gum they found on the ground and eating it, etc.
The following day my dad came over to pick up the grandkids to take them out for the day (doubt he'll be doing this ever again, but please keep reading). They went to McDonald's for lunch and then out for ice cream, I should stop and mention here that my dad is a total pushover/sucker so the kids always con him into the triple scoop, it's bigger than your head, no parent in their right mind would EVER in a million buy that asininely-sized ice cream cone for their child (can I get an amen here?) Shortly after digging into his 10,000 calorie ice cream cone, Peanut apparently began to projectile vomit ALL over their upscale, trendy, expensive, "gelato" for you snobs too good for ice cream, restaurant (yet another local public establishment here in town that we're probably banned for life from ever entering again).
My dad apologizes to the restaurant staff, and attempts to help clean up what he can with those cheap little restaurant napkins (wish I had video footage of this), but they insist on calling in their emergency cleaning crew because it's THAT bad, and my dad slinks out in shame and brings the kids straight home and I can see that Peanut is just one big giant pukeball before he even enters the house. I briefly considered not answering the door and pretending that we weren't home...kidding, but seriously, this is not an enjoyable moment in any parent's life and you briefly imagine what your life could've been like, had you only raised dogs or cats, because at least when a pet starts barfing you can just open the sliding door and push them outside until they get it all out. NO, I didn't actually do that to poor little Peanut so no need to get excited and write me a nasty email. This boy had so much puke ingrained into his clothing, there was even puke smashed into the tiny little grooves of his brand new Adidas that I still have no clue how to get out (washed them twice already and they are still bright McOrange with chunks of gelato). Within 24 hours of Peanut, Mahlon proceeds to throw up on our couch during family movie night (I personally enjoyed Daddy's Home 2 and didn't think it needed that harsh of a review, but that's just me). Poor Mahlon threw up all night and into the morning.
We woke up today all paranoid like "Alright who's next?" like we were on an episode of Survivor and we're ready to take each other out if need be to protect ourselves. Seanie Mac only wanted dad all day and since he's usually a hardcore momma's boy, we were both on edge like "Watch out, this kid's gonna blow any second" because this boy is SO insanely attached to me that whenever he goes to dad instead (like on purpose), we automatically assume something's up and he's sick because #momlife. As the day progressed without any puke, we loosened up a little bit and were like "It's okay. We're all good. Crisis over" and I took Seanie downstairs for a small pre-bedtime snack. I barely had time to hand him his sippy cup when without any warning at all (because almost two year olds are kinda selfish and inconsiderate) he starts projectile vomiting all over my kitchen. This wasn't just a little puke folks. Nope. Remember the puke scenes from Stand by Me or Problem Child 2? Well, that's exactly what my kitchen resembled tonight. I'm not quite sure how he did it, but he somehow spewed all over every square inch (I always knew that boy was gifted). My husband graciously cleaned it up, while I carried a drippy, pukey baby upstairs and straight into the tub. 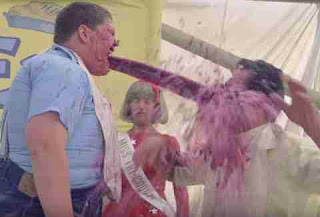 So, here I am, sitting on my bed, next to a gurgly, rumbling, squirming baby with scratchy, uncomfortable towels spread out all over my bed (just in case he gears up for round two which we'll call "The bedroom scene"), armed with a large shiny puke bucket at my feet, (AKA the big metal pan that we cook our spaghetti in and will still continue to use for pasta after this is all over with). You've been warned if we ever invite you over for an Italian theme night at our house. 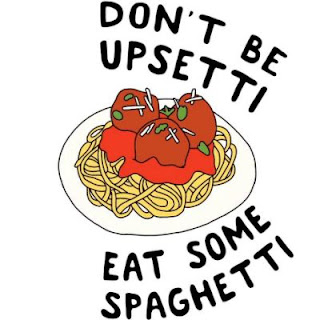 Posted by Peanutlayne at 11:41 AM No comments: