People are always surprised to hear that I don't like scary movies. Perhaps it's because we turned Seanie Mac into Georgie from IT for Halloween, but in all honestly, pretty much everything scares me. I never liked the dark, stemming from an incident at the creepiest amusement park on the planet, called The Enchanted Forest (which was recently featured on Ghost Adventures, so who's laughing at me now, huh?) I was deep into the pitch black Rabbit Hole cave when I was just a wee one, and my older cousin let out a blood curdling scream, and my mom said I was absolutely terrified of the dark from that moment on. Hmmm, I wonder if we could've sued them for emotional damages? Kidding!! So yes, my secret is out. I'm a gigantic chicken. I can't handle the dark at all, nor scary movies. I came home beyond hysterical in middle school because a teacher read us a Goosebumps style book about a monster hiding in a basement and I was traumatized for days. Don't even ask me about that one time I spent the night at a friend's house (she lived in one of those really old, creepy historic houses too with secret passageways and shit), and we watched Silence of the Lambs. It's the one and only time I've ever seen that wretched movie, and I wouldn't use my own bathroom for months because we had a heater grate above the toilet and there was a scene where they pull open the grate and a dead body fell out. I could give you a million other examples of movies that I never got over, but you get the idea. 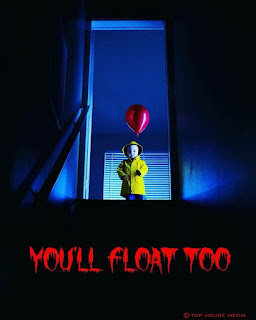 If for some reason you still don't believe me and need more proof, my husband took me to the latest IT movie last fall and it was one of the worst experiences of my life, next to that one time I got a perm and looked like a Poodle. I've seen the original IT and I can actually tolerate that one just fine because it was made for television so it's not gory and it's a bit cheesy. Plus my kids have watched it a bazillion times so I'm sort of desensitized to it now (I tried to watch it when I was a kid and didn't even make it past the first scene).

So I knew that Georgie was going to get his arm eaten off (sorry for the spoiler if you live in a cave and haven't seen or heard about it). But, this damn Pennywise was so flipping creepy that I literally hunched over in a ball, wedged my fat rolls into the stiff, uncomfortable arm rest of the movie chair, covered my eyes and literally stayed frozen in the fetal position (fat rolls planted firmly into the arm rest) until the torture was over.

My husband saw the new IT movie about a month before me during a soccer tournament with our teenager (she handled it much better than I did), and he assured me that I could totally handle it. He knows I despise movies where things jump out and that's pretty much ALL this damn movie was from start to finish, so needless to say I was not happy with him when the lights turned back on and I had to let go of the arm rest that I had pretty much clung to for dear life. He acted shocked that I didn't like it, which just made me more upset and he was like, "You're pretty pissed at me, aren't you?"  DUH!!!

Since IT was the last movie of the night to play at the theater, it was really late when it got out and I had to pee super badly. I dashed into the empty bathroom and I'm midstream when all of a sudden all of the lights went out in the mother f#$king bathroom!!!! I think I screamed, but I was so petrified that I'm not even sure an actual sound came out. It's like when you're having a nightmare and something is chasing you and you try to scream but you can't at all...yeah, it was pretty much like that.  I've never pulled up my pants and bolted out of a bathroom that fast in my entire life.  In fact, I'm pretty sure I peed my pants a little too.  Not cool at all movie theater people. Had I slipped and fallen on my own urine, cracking my skull in the process, it would've been all of your asses on the line!!!

I've heard rumors that IT Part Two is coming out next year and my response when people ask if I'm going to see it, is something along the lines of "Eat shit and die" so that's a big fat nope. Besides, I can scream for free at home, like for example, whenever I step on the scale or step foot inside the kids' bathroom.

My next scary movie experience would've been a few weeks later when we tried to have a happy family movie night. Somehow despite the first hand knowledge that I hate scary movies, my husband was still somehow shocked that I had never seen the original Poltergeist before. Husbands are so observant aren't they? We settled down to watch the movie and at first I thought, "Hey, this isn't so bad", but by the end of it, I was feeling a little frightened and tense. I headed upstairs while my husband stayed downstairs to watch a little more television. So, there I was, totally abandoned by my loved ones, and left all alone in my room. I was seconds from falling asleep when I realized that evil was lurking inside of my closet (aside from outdated, heinously ugly clothes that no longer fit).  I was much too scared to scream, so I literally sent my husband a frantic text message while hiding under my covers, trembling with fear.


Actual text message sent to my husband:
(excuse the bad language but I was about to die so...) 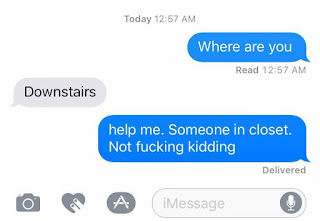 He came upstairs and searched and then assured me there was nothing in the closet (with a smirk on his face I might add). However, it's not like the Poltergeist is going to come right out and say, "Here I am Mr Crazy Husband Man who might hit me upside the head with that large baseball bat" so whatever. He was there, lurking about in my closet, ready to attack me at any given moment, I swear.

So life went on without any problems, until today. Last night my husband and I both fell asleep on the couch fairly early. He fell asleep before me, and then I crashed shortly after while watching House Hunters. It's hard to stay awake sometimes with some of those couples. I don't know where they find these people, but I'm super happy for them that they were able to find someone equally as boring to marry them. Anyways, this isn't even about House Hunters, it's about the fact that my house is haunted, ok?

So shortly after midnight, I was woken up to this horrible, heinous, something ain't right here sound. It wasn't my husband snoring, or the kids puking, or the usual scary, middle of the night noises that wake me from a deep slumber, but rather, this creepy Poltergeisty sound coming from our TV.  The screen was black but it was making this sound that I cannot even begin to describe to you. Like super loud static with electronic sounds (demons) and stuff. I quickly turned off the TV (which was frozen) but eventually it turned off and we went to bed. I noticed the time was just after midnight, which may not be significant to y'all, until you realize that it's Friday the 13th. Mmmhmmm. Not a coincidence at all.

So, this morning I get up and try to turn on the TV, and it's totally gone, dead, fried, toast. Not only is it making desperate sounds from hell, but it's summer break, and I'm stuck inside of a house with four kids on summer break without a TV!! This means no Bounce Patrol for Seanie Mac, no Dateline mysteries for me, no electronic babysitter to keep my children from whining and asking me make them 3,000 sandwiches before noon!!! I TOLD you we have a Poltergeist because there is nothing truly more terrifying than a mom stranded on summer break without a working TV (except for maybe no wifi, which also happened, because when I tried to unplug the demonic possessed TV, I accidentally unplugged our router and now our internet is spotty at best).


RIP old Toshiba..you brought us many hours of happiness and joy
I'm so sorry you've been possessed by a Poltergeist 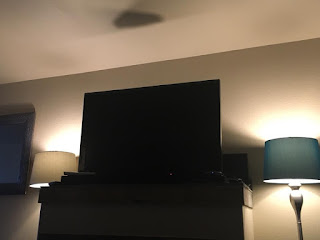 So, please Mr Poltergeist, Carol Anne, or whoever the hell is living inside of my now useless, paper weight of a TV, please go find another family to torture and mess with, because unless you plan on pulling me in through that filthy (never been dusted) dead screen and transporting me to Hawaii, I have laundry to fold, dishes to unload, and sandwiches to make. On second thought, please take me. Please!!!

Posted by Peanutlayne at 3:58 PM No comments: