I've been a horrible blogger lately. I know. I had so many grand intentions once summer break started to be this rockstar blogger, but ever since school got out, i've been sitting around kind of like this: 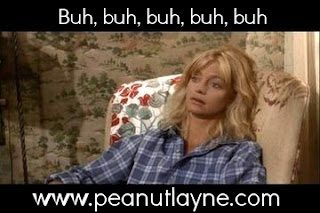 I'm one of those people who prefers to blog when i'm inspired, rather than just post daily ramblings. This is an example of what my blog would look like if I posted when i'm not feeling funny:

I've been watching lots of Netflix and eating my fair share of Junior Mints (gotta help keep them in business).  My teens were gone for the last 10 days and arrived home a couple of nights ago. Although I love having my family back together, holy hell, I forgot the pure chaos that is life with five kids.  It's a gosh dang 3 ring circus up in here!  My 8 year old daughter has been crying for her older sister for the last two weeks, "I miss my sister. When is she coming home? I can't handle one more day without her."  This morning she was saying, "I hate my sister. Why did I even miss her?"

My health/medical issues are at a super sucktastic point. I would describe in detail what's going on with me, but you'd need a brown paper bag handy....so you could barf in it.  It's gross.  Like CSI crime scene gross, although i'll admit i've never actually seen CSI.  So perhaps it's more like Breaking Bad bathtub scene gross. Yeah, it's like that.  I feel sorta like a science experiment.  I need the MythBusters team: How much blood can a person lose and still remain upright?

Since the teens are home, i'm back to daily grocery store runs which is tons of fun when you're leaking (I told you i'm gross).  I could've purchased a Corvette with all the money i've spent on tampons and overnight maxi pads.  Anyways, I got home from the grocery store last night and walked into a funhouse of fighting, screaming, and whining.  I told the kids to bring me some Post It's so I could stick one on the fridge with today's date and then when December rolls around and they ask me why Santa Claus didn't come, I would tell them to go look at the Post It.

Soccer camp started this week.  Soccer.  Ugh. I can't escape it. It's been pouring down rain but soccer doesn't get cancelled in the Pacific Northwest because of rain.  All of the other parents stand out in the rain and get drenched while watching their little darlings practice. I sit in the car and say "buh, buh, buh, buh" over and over again.  Soon I will be going to a Portland Timbers match with the hubby. It's all he talks about.  I wish I could be as excited as my hubby, although I do love those stadium nachos. I am very much looking forward to those.

I bought the boys another Vtech Innotab.  We have an original one but they fight over it all the time, and since i'm still without an iPhone (yes, i've been phoneless for weeks now), they haven't been able to make their weird little videos they like to make with my phone (the original Innotab doesn't have a camera).  This time I bought the Innotab 2S (it has a wifi connection and a video camera).  The boys are obsessed with it.  It was a good purchase, and no I didn't get paid to review the Innotab (although Vtech if you're reading this, I do have a third child that would like one...hint, hint).

So, there you have it. Lots of exciting stuff going on over here.  In a minute i'm going to go eat one of my Slim Fast chocolate bars because everyone knows that diet bars are supposed to be eaten after a heaping bowl of Reese's Puffs cereal, right?  I think so.
Posted by Peanutlayne at 11:34 AM