You know when you hear about teenagers driving around town trying to find a private, secluded place to park so they can make out?  Me either. I was an angel, but i've heard rumors that these places known in movies as the "make out point" exist.

I had a make out point experience of my own the other day, except that it didn't involve a boyfriend, or making out, but rather a burrito.  Yes, a glorious, squishy, bean burrito of deliciousness from none other than Taco Bell (minus the onions). 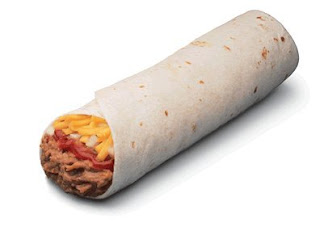 Let me back up a little.

I was running errands alone.  I needed to have blood drawn at the lab and had put it off for about two months.  Before my lab orders expired and I had to spend hundreds of additional dollars for a rheumatologist to re-order labs, I knew I needed to get my hiney in there and get it taken care of.  I ended up with the one and only super chatty lab technician amongst a sea of serious, "I'm just here to steal your blood and don't want to talk to you" techs.  I was not in a talkative mood at all. In fact I  would've rather dry shaved my legs with a porcupine, rather than talk to anyone. However, she was so darn sweet that within minutes she had me chatting and laughing as if we were long lost BFF's. Basically she is one of those magical happy people that I am not.

Anyways, I gave her my blood and headed out to run a few errands.  By the time I started to head home it hit me that I hadn't eaten all day.  I felt woozy, dizzy, and discomboobulated.  We live down the street from a Taco Bell.  Typically when I go to this particular TB, I get my food and then park in the Winco parking lot and eat my food before heading into the grocery store.  However, on this particular day I didn't need to grocery shop, and I sure as heck didn't feel like going inside just to eat a bean burrito.  So I decided to grab my burrito in the drive thru and find a private place to pull over and park on the drive home.

You're probably wondering why I couldn't just bring my burrito home to eat.  You probably don't have five kids. Imagine a lion bringing a single steak to a lion potluck.  It's like that.  There would be screaming, crying, possible bloodshed and "Why didn't you bring me something?" and if I did bring food home it would go something like this, "But I didn't want a soft taco. I wanted a Dorito taco. You don't love me.  WAAAAAHHHHH".   Kids are awesome.

Since it was close to dinner time and I didn't want to drop $30 on a pre-dinner snack for a bunch of whiney kids who were probably at home cleaning out my pantry anyways, I knew what I had to do. I needed to park and eat.   However, I quickly learned it's not that simple.

As I drove up and down the neighborhood trying to find a secluded place to park, I felt like everyone was staring at me.  I was getting the "Is this chick a drug dealer or a creeper" look, or at least that's how I felt.  In reality they were probably thinking, "What is that God awful noise that her piece of crap minivan is making?" I pulled over next to an empty soccer field and started to unwrap my burrito.  Way too many cars were driving by for my liking and I just couldn't do it.  I had burrito eating performance anxiety.  I put the burrito down and drove around the corner.  A man watering his lawn (pretty useless when you live in Portland by the way, but whatever) gave me the raised eyebrow, "Who are you?" look.   Damn! That spot was a bust as well.   I felt totally creepy and stalkerish driving down these quiet, residential streets.  Would I ever get to eat my flipping burrito in peace?

I unwrapped my burrito.  My hands were shaking as I was deliriously hungry at this point.  I took a bite as beans, cheese and red sauce plopped down my shirt.  My burrito was cold but when you haven't eaten in several hours, you would eat a Goldfish cracker that had fallen down into the ass crack of your seat and was covered in hair, dust balls, and an old Lee Press On Nail.

As I finished my burrito I looked around to see if anyone was watching.  I turned on my ignition and pulled away, feeling a bit naughty as if I had just committed a crime and was leaving the scene.   As I got home I hid the evidence in my recycling bin as I know better than to bring empty food wrappers into my house with five kids.  My recycling bin holds the remains of many of my solo errand-running rendezvous.  If someone were to open the lid and look inside they just might find multiple McChicken sandwich wrappers, empty soda cups, Dutch Bros mocha cups, Starbucks cups, Reeces Peanut Butter Cup wrappers, and a bunch of other scandalous items.   I actually feel much better getting this all out in the open. My secret is out. I am having an affair...with fast food.
Posted by Peanutlayne at 5:10 PM