As someone recently diagnosed with a very rare medical disorder, I should not be surprised that my own son is gearing up for his own mystery diagnosis.

It all started about 2-3 months ago.  Peanut started crying one night before bed that his neck hurt.  Thinking perhaps he strained his neck earlier in the day I was concerned, but didn't think much of it. He was a very healthy little guy and didn't complain much.  I gave him some children's pain reliever medicine and he went to bed.  The next day he seemed fine and all was well again, until the evening.  Then came the crying and more complaining of a sore neck.  By the next morning he was fine again and I was confused.

Then the complaining completely stopped.  He seemed normal again.  We assumed it was a strained neck from sleeping wrong, or perhaps his much larger 5 year old brother had tackled him (hey anything is possible with five kids).  Then one day as I was buckling him into his carseat, he suddenly started grabbing at his neck and screaming.  He screamed bloody murder all the way home and didn't stop once we got home. He was in pain and I knew this was something more than a strained neck.

I called his doctor and scheduled an appointment.  His doctor examined him and said, "Well, he's still rather small for his age, and his growth has been on the slow side.  I think it's his thyroid".  So off to the lab we went for some blood work.  Then we waited.   The results were pretty typical and the thyroid looked good.  The nurse advised me to try some children's allergy medicine and that his throat most likely hurt from seasonal allergies.  Okay.  I was skeptical since he doesn't really have any signs of seasonal allergies, but desperate to find a solution, we loaded up with various, expensive brands of children's allergy liquid medicine.

The next month was blissfully normal.  He seemed happy and healthy again and was back to his regular Peanut shenanigans.  I started to feel confident that we could put this mysterious "neck pain" behind us.  My husband decided to take a couple of weeks off of work in August.  We planned our annual family trip to my dad's cabin in Bend.  We went shopping for the trip, we planned out our vacation days, we got all excited and then as quickly as his pain went away, it suddenly came back. Peanut once again began to scream, "Owww, owww, my neck hurts" only this time things weren't fine by the next morning and they weren't fine by the next evening and it became crystal clear that something was really wrong. I scheduled another appointment with his doctor, but unfortunately his doctor was out of town that following week and we were also supposed to be leaving town.  So I scheduled the first appointment he had once he returned from vacation, and we crossed our fingers that his pain would go away quickly as it had in the past.

While we waited for his appointment we tried to go about our lives as normally as possible. The day before our trip we had a birthday party to attend for a close friend who's daughter was turning one.  My husband had to work so I took all five kids alone.  It was one of those moments where as soon as you get to the party, you quickly realize you should've just stayed home because Peanut was just not happy at all.  He was crying and hurting and fussing and I spent the entire party trying to bounce him up and down on my hip to comfort him. Yeah.

He spent most of the party hiding in their playhouse and screaming at other kids to get out.  What can I say? He's socially gifted like his parents. 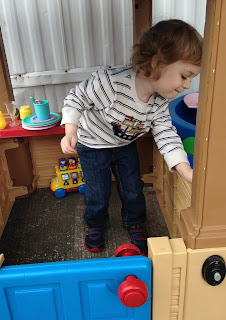 I got him home and noticed he felt a little warm.  Up until this point he had not had a fever at all.  He fell asleep rather early and the morning of our trip he woke up with a 103.5 fever.   The trip was off and to urgent care we went.  Unfortunately the doctor at urgent care couldn't help much because they don't deal with chronic medical issues, but she gave us the number for a pediatric ENT (ears, nose and throat specialist).  We called him as soon as we got home and were able to get him in for an appointment within two days. However, those two days were hell on earth for us.  Peanut was so uncomfortable and I was pretty much camped out with him on my bed.  We watched his favorite movie, Cat in the Hat about 10 billion times.  He wasn't eating, wasn't sleeping and we were counting down the minutes until his ENT appointment.  We were hoping to get some answers at the ENT, but he didn't give us any hints or clues as to what he suspected was wrong with Peanut.

However, he did send us to a children's hospital for a barium swallow study.  With a barium swallow test you cannot have anything to eat or drink for at least 4 hours before the test.  Peanut was pretty mad. Okay, he was pissed!  It was not a fun morning trying to explain to a 3 year old why they can't have anything to eat or drink.   The barium test went surprisingly easy.  The tech mixed his shake with cherry Torani syrup, which made J and I laugh because we love Torani syrup in our coffee.  I was nervous that he was going to refuse the shake, but he actually loved it and wanted to drink more...gross.  His swallow study test came back normal, which is awesome, but a tiny bit frustrating in a small way because now we are back to square one.  We were hoping to avoid the more invasive tests where he would have to put under with anesthesia, but that may not be possible at this point.


He was not happy about the no food rule 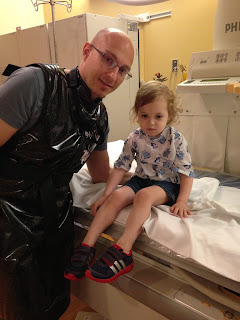 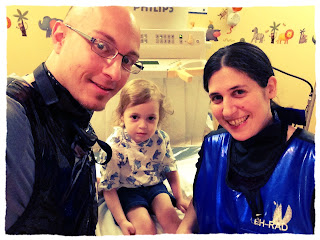 We do not have any idea what's going on and why he's having these random cycles of pain.  We've Googled his symptoms until our fingers cramped and had many late night conversations of what we think is wrong, but we are just normal people, not doctors.  At this point the next step is another referral to a specialist for more testing.  This time he'll be seeing a gastroenterologist.  I'm also hoping he will be allergy tested.

I've been so incredibly busy and stressed out this summer that I haven't had the time to blog like I did last summer. It seems like the older the kids get, the busier I get.  School starts back up in a week and honestly I don't even feel like I got a summer break yet.  This summer has flown by faster than any other summer I can ever remember.  I'm not ready for school at all.  My 8 year old needs uniforms purchased, I still have some random school supplies on the list to find, bills to catch up, phone calls to make, and just dozens of things that I put on the back burner when Peanut got sick.

I have a few more posts to write and hopefully post this week.  Despite all of the drama, we did manage to escape to my dad's cabin for a few days last week so I will be blogging about our trip next.  We got home from our trip late Thursday night and my husband woke up Friday morning with a horrible case of food poisoning and spent most of the weekend puking his guts out.  I know, I know...you are all dying to be me right about now.  I get it.

Peanut seems to be doing okay for now.  He's had a couple of good weeks with minimal pain so we are happy about that.  At this point I don't have any answers to give so here is a really cute picture of him at the hospital. 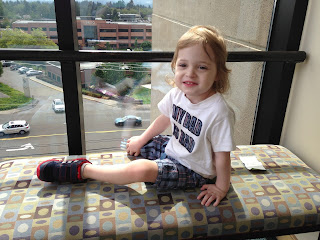 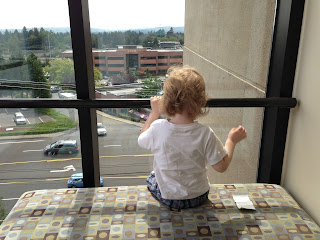 Oh and I almost forgot....while we were at the hospital with Peanut, my soccer obsessed husband saw Diego Chara from the Portland Timbers (MLS soccer team).  He was walking in front of us and held the elevator door open for us, but he was going down and we were going up.  I held my breath thinking my hubby was going to humiliate us by following Chara around the hospital like a stalker (which the hubby later admitted he almost did), but luckily all he said to him was, "Go Timbers" and Chara smiled at us and said "Thank you".  Of course i've been teasing him as it was kind of dorky and funny that all my star struck hubby could muster up was "Go Timbers".

Posted by Peanutlayne at 3:26 PM