A Triscuit, a tasket, my stomach looks like I swallowed a bread basket.  The other day while cruising down the aisles of Winco, I noticed that the crackers were on sale.  I'm not a cracker person.  Of course that doesn't mean that I don't occasionally eat them.  For those of you who were lucky enough to catch my Facebook status the other day, there was plenty of mortification (I don't think that's a real word but i'm going with it), when I mentioned that for breakfast I ate brown rice crackers, topped with barbecue sauce and blue cheese crumbles.  I'd be lying if I said that I kind of want to go back to the store and buy more blue cheese crumbles so I could eat it again.

Anyways, back to the cracker aisle moment.  I was planning on buying some basic crackers for the kids when I stumbled upon Brown Rice and Sweet Potato Triscuits.  I picked it up, examined the box, then put it back. "We don't need these" I chanted to myself over and over.  I started to leave the cracker aisle, but those suckers lured me back.  I love Triscuits (one of the few crackers I actually like) and I love sweet potato, so this sounded like a match made in cracker Heaven! 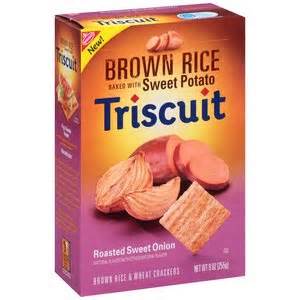 When I got home I tore open the box.  It was Peanut's fault. He handed me the box and said, "Pwease momma can I have one?  It will be happy in my tummy."  How can I argue with that?  Holy adorable toddler moment! Anyways, after handing one over to Peanut, I excitedly took one out of the box (hey, I have five kids, this IS an exciting moment, okay?) It was Triscuity and wheaty, but very hard as if it had popped a Viagra and had a 48 hour erection.  It was also kind of weird.  I can't explain it, but I was convinced that I didn't like them and I was mad that I had wasted $1.50 on them.  However, before I knew it, I had consumed half the box.  Apparently they weren't that bad because they are almost gone.  Would I buy them again?  Probably not.  I'll stick with the original.  But hey, I bet you feel a whole lot smarter and wiser after reading this, right?

In other news, my toilet looks like something from The Ring. I'm still waiting for a creepy, black haired girl to pop out and make the O face.

I've also decided that douchebuckets who pull out in front of you as if their balls are on fire and then as soon as they get in front of you decide to drive 10-15 miles under the posted speed limit should be branded with a scarlet letter.  I vote D for douchenozzle.

My husband took my new MacBook Pro to work today.  I've had it for a little over a week now and I didn't realize just how addicted I had become until he mentioned that he needed it and I felt like running to the bathroom to throw up.  Why couldn't he just leave the MacBook and take the kids to work?  I could handle a day without children, but the MacBook? NOOOOOOO!

Today after dropping off the older kids at school, I told the boys we were taking a trip to Dutch Bros. I needed something to make me feel better about my missing laptop.  On the way to DB, Peanut asked, "Momma, are you going to the doctor?" He's a smart kid because a mocha at Dutch Bros is pretty much a trip to the doctor and getting handed the best prescription drug out there. Anyways, i'm going to go enjoy my white chocolate caramel mocha from Dutch Bros.  It's happy in my tummy.
Posted by Peanutlayne at 9:42 AM