Phew, what a whirlwind it's been lately! I don't want to be one of those douchenozzely bloggers who apologizes for not posting much but i'm gonna be.  As Peanut says, "I sorry."

So, I survived my endometrial biopsy on Friday but holy poop it hurt! I do not recommend this procedure and I have five kids so i'm pretty tough when it comes to exams on my hoohaw. I was not prepared for this biopsy at all.  When I got there and saw all the medical supplies lying on the counter I started to sweat. The nurse said, "Oh don't worry. It wont hurt that bad. Just a little cramping." I began to relax until my GYN walked in and said, "This is going to hurt. You will be saying, Doc I never want to have this test done again."  Gee, that's reassuring as you're lying sunny side up and butt naked under a crappy, thin sheet!  The biopsy didn't last long but I was seriously wanting to scream out a string of obscenities, or at the very least kick the doc square in his eyeball.

After it was over I couldn't even move.  The doc had to help me up and he said, "How much ibuprofen did you take before you came in? I don't think you took enough."  I looked at him like, "HUH?" as I was not told to take anything.  He then asked, "You mean the nurse didn't tell you over the phone to take ibuprofen an hour before you came in?" I shook my head no and then gave the nurse the stink eye.  Anyways, the intense labor like contractions went away after about 15-30 minutes, but but I developed a very unpleasant side effect.  My momma would roll over in her grave if she knew I was going to talk about it on my blog but here goes….I have the worst gas i've ever had in my entire life!  I'm talking about knock a donkey over dead in his tracks! Plus the bloating is crazy! I look like Violet in Charlie and the Chocolate Factory after she turns into a giant blueberry, minus the blue hue.  I believe it's from the air being trapped in my abdomen from the procedure, but either way it's super awkward and embarrassing, especially when you have dinner plans with your husband's best friend and his girlfriend at their place.

My husband's friend and his girlfriend do not have kids.  They are one of those gorgeous (you want to hate them but you can't because they are too damn nice) couples.  Feeling bloated and disgusting, I got ready for our dinner date by throwing on some jeans, a spandexy tank top to try to slim out the bloat, and a shirt to go over the secret spandex.  Before we left for their house I tried desperately to get out some of the trapped gas but it wasn't working at all.  My hubby suggested taking two Gas X pills.  I'm convinced that Gas X's secret ingredient is actually gas because it made my gas so much worse!

Anyways, we headed over to their house and I was feeling nervous and sweaty.  My hubby asked me what was wrong and all I could muster out was, "I just hope I don't fart at their house."  His response, "Babe PLEASE don't." Great, added pressure.

We got to their house and greeted the gorgeous, movie star looking couple.  S is a professional costume designer for the film industry.  You can see her work on Grimm as she works full time on the set.  She's adorable, talented, beautiful and yeah, all of that.  I made it through dinner without passing gas by squeezing my hiney cheeks together so tightly, it was as if I was trying to crack some walnuts.  I drank two Diet Pepsi's in the process.  We all sat down on the couch and proceeded to watch a movie.  Considering both A and S work in the film industry, it's a given that you are going to watch a movie when you go over to their house.  You literally cannot leave their house without watching a movie.  It's like that Adventures In Babysitting movie when the kids wander into that nightclub and the man says, "Nobody leaves this stage without singing the blues."  The guys picked Django which didn't make me very happy considering I had just gotten over the nightmares from watching Robocop with the hubby a few weeks prior (hey in my defense it was my first time watching it as my mom wouldn't let me watch it when I was kid because it was so gory. Now I know why. Robocop is super creepy).  I knew I was in for it when I heard that it was a Quentin Tarantino film.  What I didn't know was that mother f'ing movie was THREE hours long!   I was afraid to use their bathroom because I knew I would fart and the bathroom was located right next to the living room, so I held my bulging bladder the entire time. By this time my Pepsi's had kicked in and I wanted to cry. I wanted to scream. I wanted to pee. I just wanted to freaking fart! But I couldn't so I didn't.

I wish I could say the gas problem has passed, but it hasn't. I'm convinced that some trapped air made it's way into my abdomen during the procedure and decided to just set up shop in my intestines.  If the skies of Portland suddenly start to resemble those of Los Angeles, don't worry, it's not pollution, it's just my gas finally making it's way out. 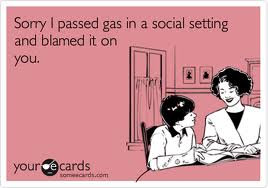