I survived the great snowpocalypse in Portland. Sort of. Stop laughing.

We live in Portland, which means there's usually a pretty good chance we'll make it through winter without any snow.   Since it's February, I assumed we had survived another winter without the annoying white stuff.  If it does happen to snow here in the beautiful, quirky, Pacific Northwest, then you hear it described as a "Snowpocalypse" or "Arctic Storm" or "Blizzard", etc.  It's a tad overdramatic, I get it, but we Portlanders are very theatrical people.

On Thursday I drove the kids to school like any normal day.  There was no snow that morning, although rumors were starting to swirl that a "storm" was a brewing.   Within a few hours of dropping them off, it began to snow.  My younger boys were eagerly standing by the window, thrilled to see the first signs of snow flakes falling, and were already hounding me about going outside to build a snowman.  Our puppy, Olive, was deeply disturbed by this strange white substance falling out of the sky and wouldn't stop barking.


Olive with a snow mustache: 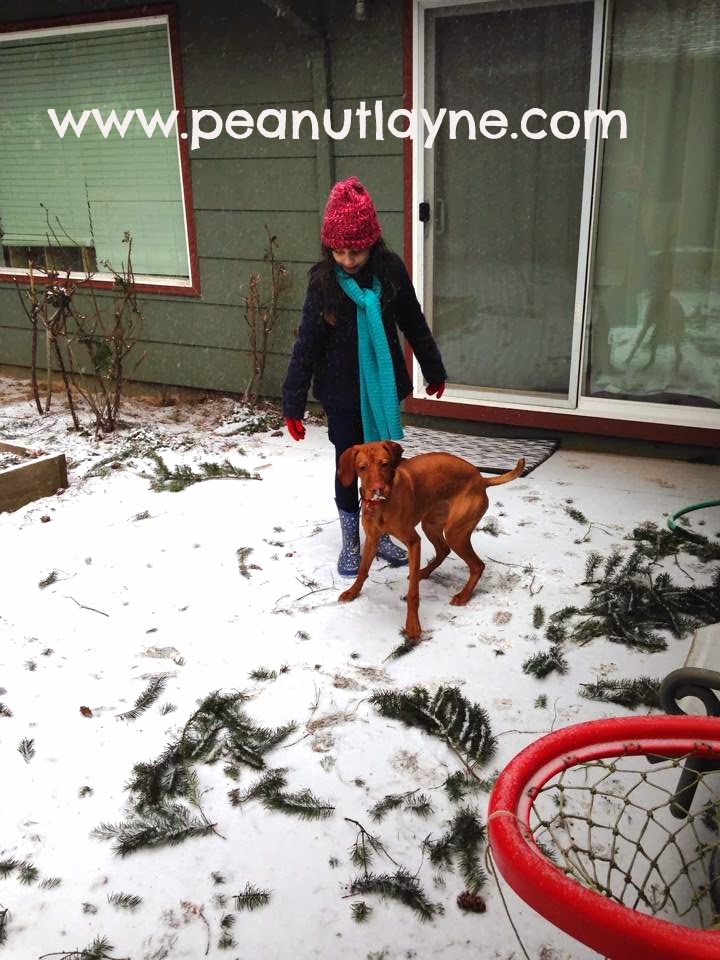 By noon the snow was coming down pretty good and was actually starting to stick. I knew what this meant. Life as we knew it was over.  OVER!  The city would soon be shuttin down and boy did it ever.  When Starbucks closes early, you know that the shit is about to hit the fan!  By 1 PM I was getting frantic emails and phone calls from the school district saying all schools were closing early and I needed to come pick up the kids.

The scene in our city was total chaos.  People sliding all over the road, cars parked on the side of the road, some cars were stuck, etc.   It's true that the Pacific NW gets clowned pretty much all over the country for not knowing what to do when it snows--and they're right. We don't. 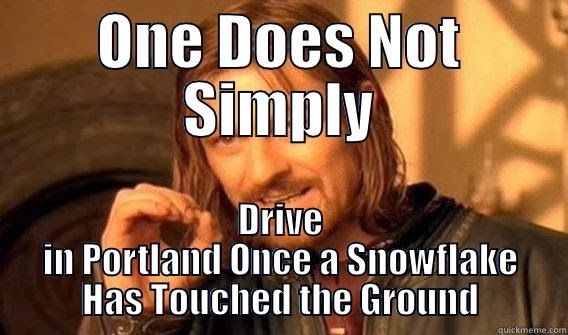 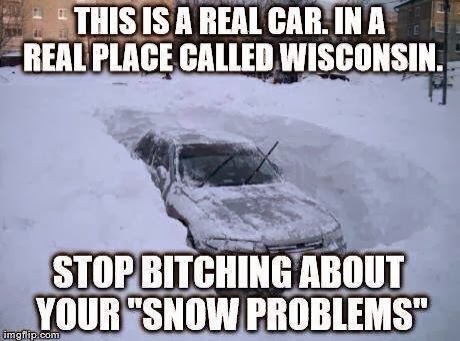 OK, we get it people from Wisconsin and Minnesota and other places where it's so cold your breast milk freezes as soon as you step outside. We are hipster dumbasses who drive small, energy efficient cars and don't know how to handle snow, but we can drive in a torrential downpour like nobody's business.  OK, so maybe we suck at that too. Never mind.

Anywho, these are photos I found on the Fox 12 Oregon's Facebook page: 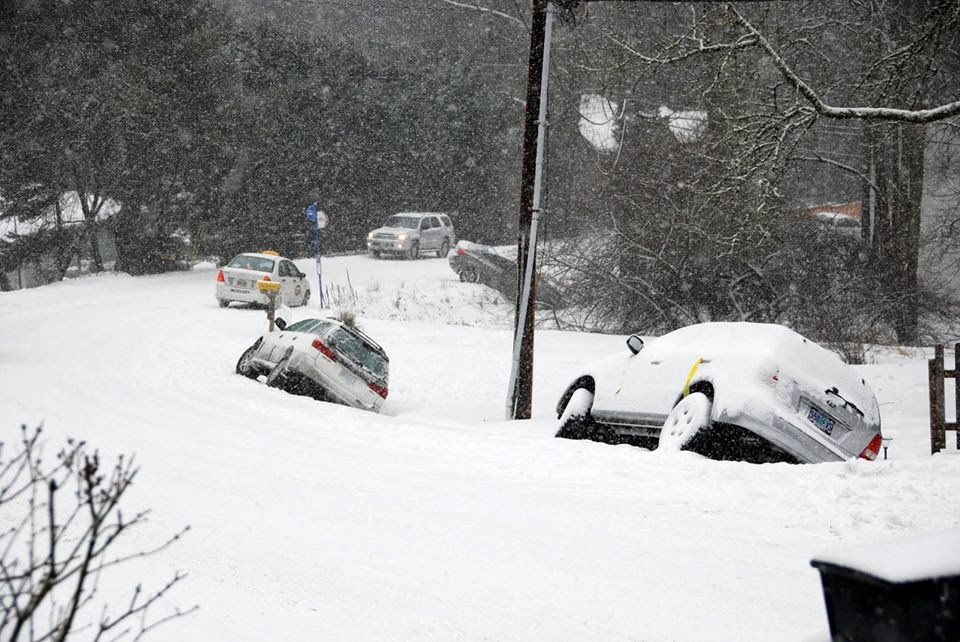 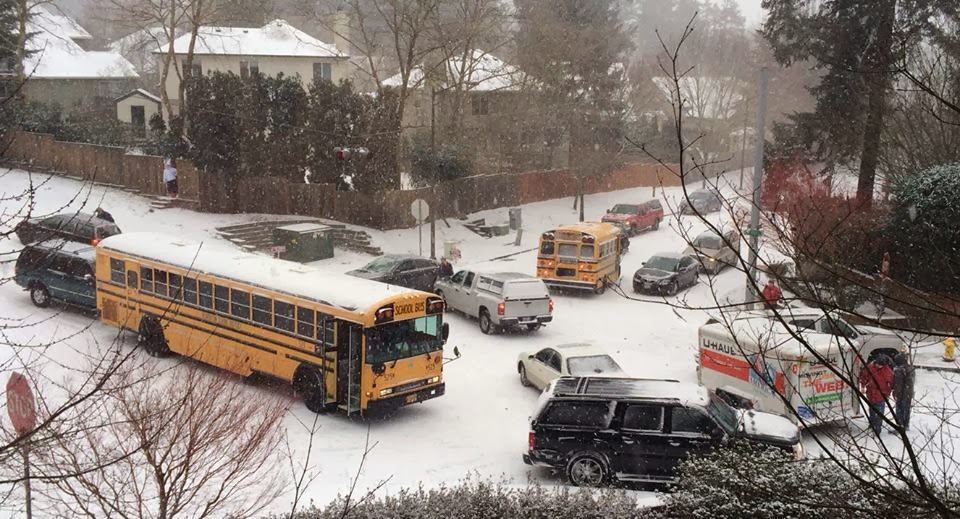 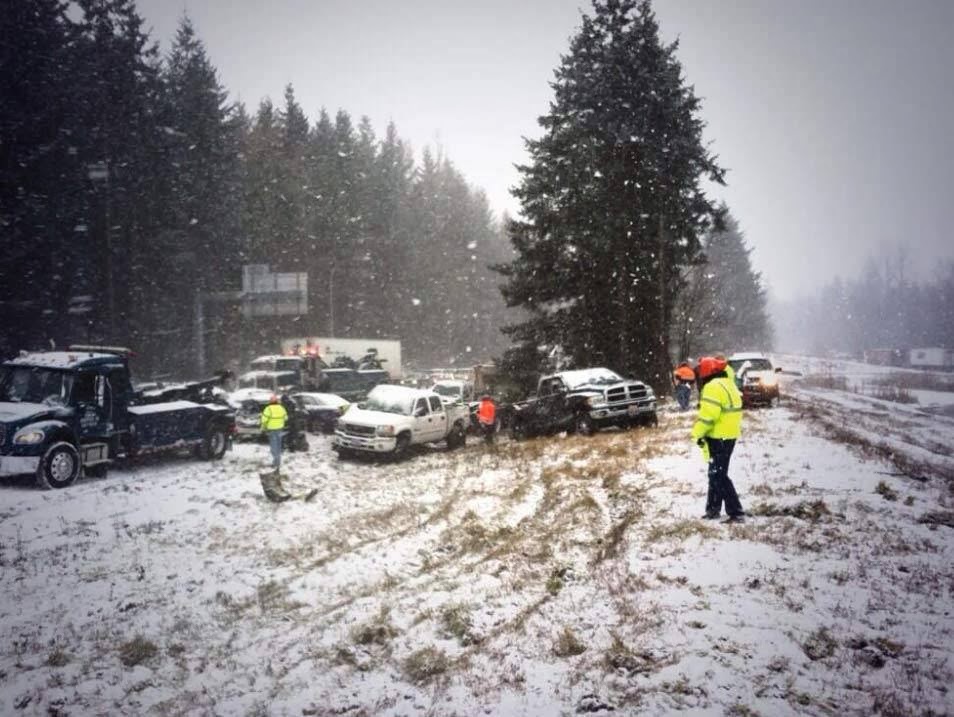 As you can see, venturing out of the house has been pretty difficult these past few days, so i've been stuck at home since Thursday afternoon with five kids and a dog.  Five kids and a dog in case you missed it the first time.

This describes how I felt by Saturday, errrr, Friday afternoon: 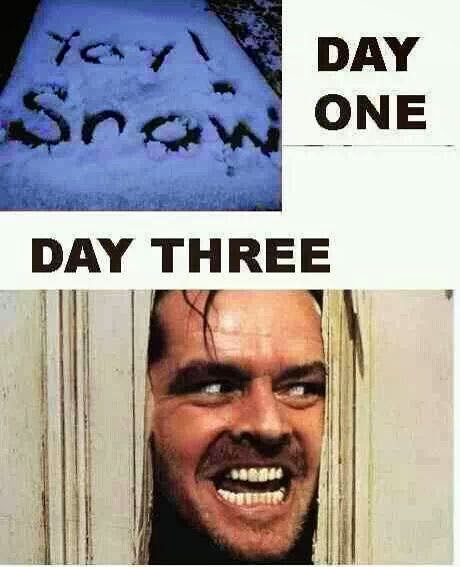 School was cancelled on Friday and again today. I think last weekend was the first weekend I can think of in a very long time, where I didn't leave the house at all.  Not once.  Not even to walk across the street to get the mail.

Anytime a car was brave enough to drive down our street I wanted to yell out the window, "Please, take me with you" but they never stopped.  Those bastards didn't even stop to hand me some booze or chocolate!  What the hell is the matter with people these days?!

So pretty much everyone and everything has been getting on my nerves.  My kids are currently trying to kill each other with their bare hands as we speak so there is really no need to watch the Olympics. I have the real life Hunger Games taking place at my house, folks.  My dog keeps tracking in muddy paw prints all over the floor and i'm about ready to slip some Glad bags over her hooves.  My house looks like, well, like five kids and a dog live in it.  I watched more Netflix than I care to admit.  I drank way too much coffee, which means chronic insomnia so getting up tomorrow morning is going to be a beast. I'm still braless and in my pajamas and haven't washed my hair since, geez, when the hell did I last wash my hair?!

The good news is the rain is back and the snow has turned to ice and it's slowly melting so school should be back in session tomorrow.  Then I can get back to the important things like cleaning my house, paying bills and the other super responsible things I do during the day when my hubby is at work and the kids are at school. Yeah, right! Who am I kidding?  I'll be curled up in the fetal position, rocking back and forth while sucking my thumb and reminiscing about how I survived the great Snowpocalypse of 2014.

Posted by Peanutlayne at 3:50 PM