My response to being called the "Worst mom in America"

*This post is in response to this lovely little article written by someone at NYDN who most likely didn't even read my original post.

Hi there!  We haven't been formally introduced yet. My name is Kristen, and according to you, I'm the "Worst mom in America."  Which I have to tell you, as a mother of six, I've heard it many times before.  You see, I've raised two teenagers, and teens tend to say these kinds of things a lot, typically while rolling their eyes and slamming their bedroom door in your face because you dared to say no to some entirely inappropriate request like, "Can I stay out until midnight on a school night?"

Since you're the professional writer, and I'm just a lowly mommy blogger, I hope you don't mind that I'm offering some assistance in pointing out the many inaccuracies in your article, since you seemed to really struggle to gather the actual facts in my post.

1) The photo of the name tags.  You pointed out that I took a picture of the name tags of the party guests who were invited. I didn't. Those were actually "Diary of a Wimpy Kid" character names, so I'm guessing you haven't actually read the series since you failed to recognize any of their names. I bet you feel slightly embarrassed over this little blunder, but it's okay. M said he's more than happy to mail you a copy of one of his DOAWK books so you can familiarize yourself with the characters. He's a very generous little boy.


This was a picture of a GAME we found online.
These are DOAWK characters, not actual party guests 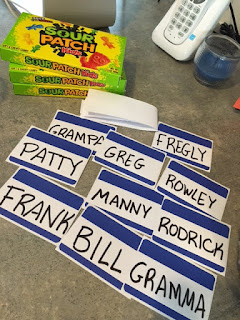 2) The photo of the "uneaten cake" which I'm assuming you think we left sitting alone on the table to collect cake dust?  Lots of moms take photos of the cake before it's hacked up into millions of pieces. I paid good money for that custom cake topper, and darn it, I wanted a photo!  And OF COURSE we ate the cake!!! Did you miss the part where I said I have a four kids living at home? The kids were waiting to tear into that poor unsuspecting cake the second I set it down on the counter. We demolished that cake as soon as we finished eating pizza, and whatever small amount was leftover got eaten for breakfast the following morning (since I'm the worst mom in America, I might as well defend my title).


This photo was taken a couple of hours BEFORE the party.
Then it got eaten. And M would be proud to be
compared to the Wimpy Kid on the cake (his name is Greg Heffley by the way) as you so rudely stated in your article 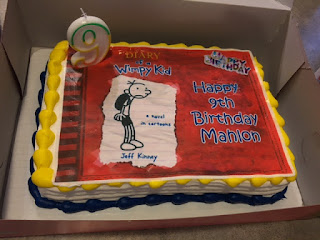 3) The goody bags that we "laid out to horrify our son".  Again, another fatal error in your fact checking here. M set the table BEFORE the party. He wanted it to look nice, and I think he did a pretty good job of setting the table for a nine year old.  I wish he had the same enthusiasm for setting the table at dinner time, but that's a whole other topic.  The empty spaces were promptly filled in by family members, as you can see in this photo here: 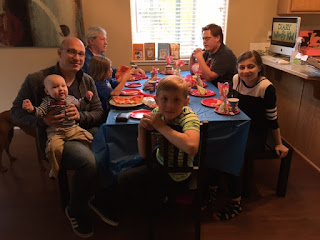 4) "And then made him stand there, alone, until the garbagemen came."

How many times do I have to say it?  All of the photos of him posing alone were taken BEFORE the party. The only photo that was taken after the party fiasco was of him at the bowling alley.  And I made him stand there alone?  Pffffft. I only wish I had that kind of power over my kids!! 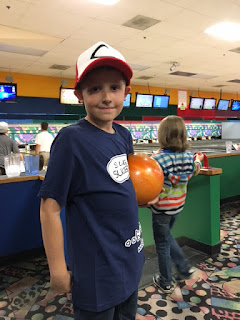 So this brings me back to your first paragraph when you insinuate (no rather accuse) my husband and I of setting all of this up so we "get clicks".  People can click on my blog until the cows come home, but I didn't have a single ad running on my blog when this story went viral (nor do I now for that matter).  If I had really set all of this up to "get clicks", wouldn't I have had my blog loaded up with ads so that I was getting paid while my blog was getting millions of hits a day? I do find it slightly ironic that you're hinting I did this all for the money and fame, considering you're the one who gets paid to write and is most likely profiting off of my story, but i'll let that one slide for now.

And, you're also claiming I did this for a book deal? Please! I barely have the time to fill out my children's reading logs every night, so it may be awhile before I can get that book written. Maybe in fifteen to twenty years, if raising all of these kids hasn't killed me by then. I tell you what, if I do ever write that book, I'll be sure to send you my first copy free of charge, but media mail of course. I'm a mom on a budget.

FYI, I've already been published in a couple of books, one a NYT best seller, I Just Want to Pee Alone  *Insert shameless book plug here since I'm honored to be included in two hilariously witty humor anthologies.

The notion that we had this master plan to set all of this up to exploit our son for fame is pretty hysterical. If any single one of those photos had been staged, they would've looked a heck of a lot more professional than they did.  My husband works in the film industry and he's a pretty talented guy. He does commercial work for major companies, and can do it all from photography to videography, editing, directing, etc. He was actually mortified that I dared to put my dark, unedited, crappy cell phone pics on my blog because he can't help but look at a photo and critique it. It's his job and he's brilliant at it.  So trust me, if the photos had been staged, they would've come from him and they would've been much more professional looking.

Here's what my little post did for M, since you're so concerned for his well being, enough that you even poked fun at him and the entire "Diary of a Wimpy Kid" fan base by saying M is the wimpy kid on the cake (which isn't even an insult for DOAWK fans by the way).

The most amazing thing that has come out of this story, is that our little boy has found his voice. He went from a shy, not so sure of himself third grader, to this incredibly confident child who beams with pride. He was interviewed by the local news last night, and I've never been so proud of my son as I was last night.  He was humble and appreciative and wanted to make sure and "Give a shout out to all of America".  The world could use a lot more Mahlon's and a lot less of people like yourself.

Throughout all of this, he learned that despite sadness and disappointment, there is also a lot of good in this world, and that kindness and compassion do exist.  He's connecting with so many other children from all over the world who relate to him and they are even becoming pen pals.  He's researching different charity options, so that he can pay it forward to other children in need. Many of the gifts we received will be headed to charity.

I think people are so fascinated by our story and drawn to our son because he's a good kid who represents hope and resilience. His sweet innocent face also serves as an important reminder that people should be more aware of how they respond to an invitation. M isn't curled up into a ball,  crying and feeling sorry for himself, and my post definitely didn't devastate or humiliate him as some people like yourself are saying. You want to know what really humiliates my children? Their mom standing at the bus stop with dried spit up on her stretch pants. Yes, that really happened, two days in a row actually. 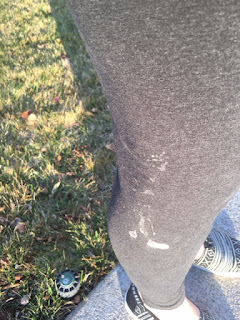 And yes, of course I was devastated for my son when no one showed up and he was crying and upset. Excuse me for saying this, but what a stupid thing to say! We were all upset for M, even his older sister who isn't very sympathetic.  You really honestly believe that only M was devastated over no one showing up to his party?  I have to question your loyalty as a parent because any parent I know, would've been devastated to see their child in tears.

I wrote my post for my blog readers because that's what I do. I'm a blogger. A terrible, untalented, stretch marked, evil mommy blogger, but nonetheless a blogger who writes when something strikes me as funny, sad, emotional, scary, etc. What poured out of my heart and soul when I wrote my piece was pure, raw emotion from deep inside that place that only a mother knows. A mother who was deeply hurting for her precious son because she simply wanted him to enjoy a special day with his friends, and he didn't get to do that. I wasn't expecting anyone to read it, and I certainly wasn't expecting anyone to reach out like they did. We are completely blown away by the outpouring of love and support that our family has received and it has changed our lives forever. Not because we're searching for fame (because we're most definitely not) but it's changed our entire perspective, and given us a new lease on life. Our lives have been changed for the better because we now have hope and faith in humanity, and you can't put a price tag on either of those things my friend.

Sincerely,
Kristen P. Layne
AKA "The Worst Mom in America"

Posted by Peanutlayne at 2:21 PM