We're back from our whirlwind of a trip and WOW! What an amazing adventure! First off I cannot even describe how generous and kind it was of Jeff Kinney, author of the "Diary of a Wimpy Kid" series to offer to fly our gigantic brood to Seattle to meet him in person.  I'm convinced he's the nicest person on the entire planet or on a personal mission from Jesus himself, because we're not the smallest or easiest crew to travel with.

On Sunday, we were picked up at our house by a driver, which felt very surreal as I've never been picked up by a driver before. As a mom to many, I tend to do way too much for others (it's a bad habit) so he had to stop me from trying to load up the trunk with our luggage (yes, I really did this) and then he also had to stop me from trying to fold down the backseat to let the kids pile in. He kept saying, "Ma'am, let me do it. I got it" but sometimes it's easier to just let me do my thing than try to stop me.  We had a personal driver the entire trip (but different drivers) and I attempted to load the trunk and fold down the seat with every single one of them, and they all said, "Ma'am, PLEASE, let me do it" so as you can see, I follow directions really well.

The flight went off without a hitch, except for baby Seanie (who is almost eight months old) wouldn't stop licking the window of the airplane. This would not be significant news to report except that he came down with a hellacious cold that very same evening, so I'm assuming that licking the airplane was not a very wise choice on his part. It was also quite disgusting to witness and I'm super glad my germaphobe of a husband was seated a few rows back and couldn't see this happening or he would've tried to bleach Seanie's tongue (not literally, at least I don't think so).

We were dropped off at the shopping plaza where the book signing was taking place, but we had a few hours to kill before the actual book signing.  This is where my husband and I gritted our teeth as we knew we had to keep two crazy boys, a sassy, eye rolling tweenager who knows everything, and a teething baby who missed his nap, under control in a crowded place without being able to toss out idle threats or scream until our throats became raw because we were in public.  We also didn't have a chance to drop our luggage off at the hotel so we got lots of weird stares as we sat at a table in the cafe of the book store with four kids, a giant suitcase, a car seat and a mound of backpacks and carry on bags for each. We probably looked like we were "Homeless in Seattle" but oh well.

About an hour after we arrived, a black van pulled up and Jeff Kinney walked in and was about to walk right by our table. He probably wouldn't of noticed us except the boys spotted him right away and were yelling out "Hey, Jeff Kinney, it's me" so the ice was broken as we got the awkward introductions out of the way a bit earlier. My husband was in the bathroom changing his shirt (because we're fancy like that), so he missed out on that part.


Here we are walking to dinner with Jeff Kinney like it's no big deal
when it totally was.... 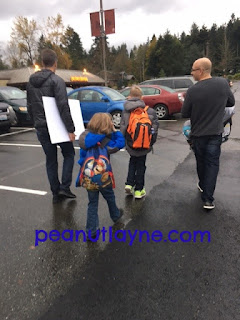 We had an amazing time at dinner and I don't think Jeff got that many words in because Peanut is much like his mother and doesn't stop talking.  Jeff drew Mahlon's comic book character, Jack, from his series "The Life of Jack" and Mahlon was drawing Greg from DOAWK. Peanut was drawing something too but I honestly couldn't tell you what it was because, well, let's just hope he chooses something other than an illustrator as his career path (he gets his lack of artistic flare from me as I literally cannot draw a stick figure.  I'm dead serious. I really can't).


You can see Peanut's mouth is wide open...and it stayed that way 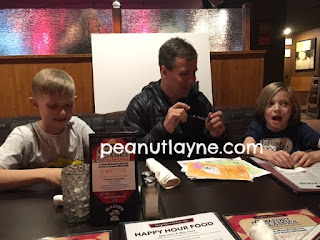 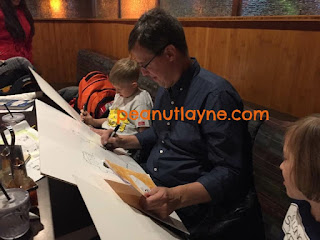 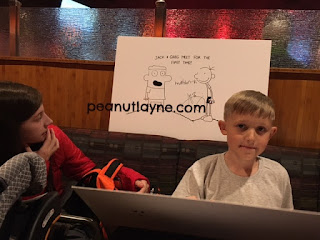 After dinner it was book signing time. We were fortunate enough to have reserved seats in the front row which was really cool. No one has ever reserved seats for us before and typically when we get seated somewhere, it's far in the back by the dishwashers where the sound of clanging dishes drown out my herd of noisy children. We were especially blown away when Jeff called Mahlon up on stage!! He got to draw his own character, Jack in front of a large audience. I was expecting him to freak out and get nervous, but he didn't at all and seemed very comfortable on stage. I'm so glad I was able to record it on my phone because it was such a special moment.  I don't know how to upload it onto here so I put it on my Life On Peanut Layne's Facebook page if you'd like to see it. I will be sharing more details about the "Life of Jack" soon. Mahlon is working hard on his own comic book series and hopes to have it published in the near future.


We had front row seats at the book signing 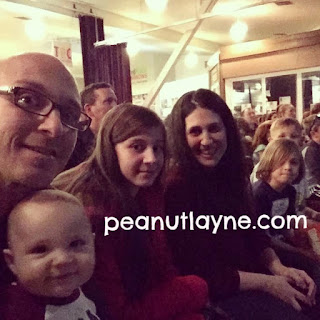 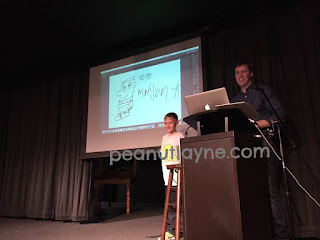 The whole fam with the one and only Jeff Kinney! 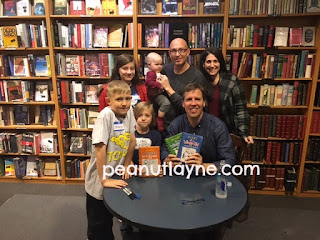 The following morning Seanie was awake bright and early so I decided to take the kids to the hotel restaurant for breakfast alone as my husband was still in a travel induced coma.  Of course I had to be the only one in the entire restaurant with kids and come to find out that breakfast was served on actual glass plates versus the type of hotels we're used to staying in where you can grab some muffins and bagels off of the trays and head back to your room.  I leaned down and told the kids "This is a very bad idea" as it looked a little fancy and did I mention above that I was all alone with four kids? To top it all off the restaurant was small and trendy and not stroller friendly at all so of course I just had to bring the baby in a stroller (and then promptly take him out when he started screaming). Much to my horror, Mahlon dropped a big blob of jelly on the table and luckily I caught him out of the corner of my eye (we moms of many can see everything) and stopped him right before he tried to lick it off of the table. He claims he wasn't really going to do it, but he totally was. We managed to eat our food without a single dish getting thrown on the floor so all in all, it was a success.


Glass plates are dangerous with my boys...
I took lots of deep cleansing breaths 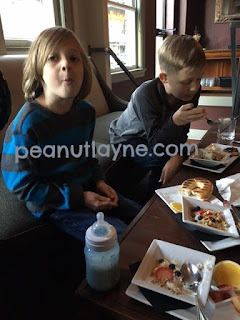 My baby boy smiling in a non child friendly restaurant 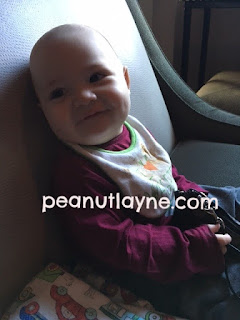 After breakfast we finally got the husband out of bed and ventured out to the Space Needle which wasn't far from our hotel. I hadn't been there since I was a kid and our kids had never been to the top. It was a bit stressful keeping track of four kids, especially since the boys were running around in circles at full speed (which I'm sure the other patrons just loved, especially since it's not cheap to visit the Space Needle these days). Sorry, people of Seattle who happened to get stuck on the same time slot as us.  They have these selfie stations now on top of the Space Needle, and I have no doubt that several families probably have blurred body parts of Peanut and Mahlon in their selfies.


Walking to the Space Needle 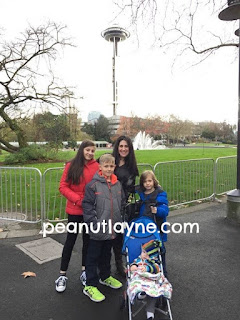 Mahlon checking out a big wall of photos on the Space Needle...super cool! 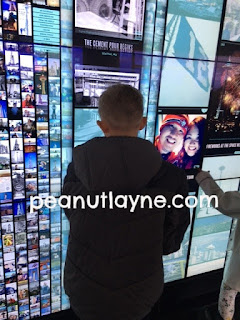 Our turn for the selfie station!
This was a wide shot but there was an older couple bending down right next to us and it looks a little weird to see their butts in our faces so I cropped them out 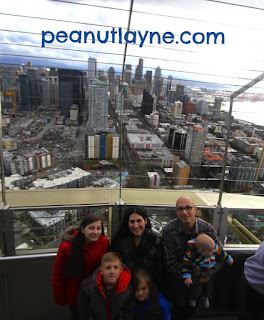 No one fell off the needle so I'd say it was a successful trip!

After the Space Needle we had just enough time to eat lunch before sprinting back to the hotel to meet up with the driver who took us back to the airport.  This time around the airport check in wasn't quite as smooth as we were in Seattle and not our tiny little local airport. According to my husband, I gave one of the TSA agents attitude but they snapped at me first as I asked what I thought was an innocent question about where I was supposed to stand, so they threw away my brand new lipstick. I have no actual proof of this, but it was in my bag when I went through the line and wasn't in my bag when I came out. So bottom line, don't piss off the TSA agents because they don't mess around and something will end up getting thrown away. Mmmhmm. It will probably take me another ten years before I finally replace that tube of lipstick by the way. My usual lipstick routine consists of chewing on my lips until they bleed and then smearing the blood around on my lips. Voila! Instant lipstick.

After the check in, we had 2.5 hours before we boarded the plane. That might not sound so bad to you, but add in four kids and a grumpy husband and I think I would've opted for a root canal (at least you get some pain pills when you're done).  I was so thankful when we finally stepped onto the plane and A) Discovered that no one was sitting next to me which was awesome since I had a baby on my lap and nobody wants to sit next to someone else's baby B) Seanie fell asleep within minutes of me sitting down on the plane and slept the entire flight. WOOHOO!!!

We made it home safely and of course there is no school this week for Thanksgiving break so I wish I could say that it's so wonderful and relaxing to be back home, but it's chaotic and noisy and well, pretty normal.

Posted by Peanutlayne at 4:31 PM