Monday was a school holiday (President's Day) and my kids were bugging me bright and early to "take them somewhere fun".  Of course they typically choose crazy stuff that's not really possible for me to do on my own with three kids and an infant, like some type of skating, the local water park (the younger kids don't swim that great yet and I'll be damned if I'm going to squeeze my glazed donut filled hiney into a swimsuit in February), glacier luging, etc, you get the idea. I'm not a big fan of venturing out with all four kids alone, so I don't do it very often. It's tiring, stressful, and anxiety provoking (just the mere thought of it makes me bust out in the flop sweats with puffy hives).

For Christmas this year my dad bought our family a year long membership to the High Desert Museum, at my request since the thought of more toys coming into this tiny, overcrowded, cluttered rental house briefly turned me into the robot that goes haywire on RoboCop. Unfortunately Bend doesn't have a children's museum, or OMSI like we had in Portland, but the HDM is still packed full of fun, and the perfect place to spend an afternoon.  Plus, I was feeling a little guilty that I had only used our family membership once since Christmas, since we've been buried under 10,000 feet of snow and haven't ventured out much these past couple of months. So I told the kids we were going to the museum, and that was final.

It took me about two hours to get all four kids ready to go. Not even joking. Two freaking hours. By the time I got everyone locked and loaded into the car, I was already completely wiped out and dying for a nap. I was spoiled with having older, independent children before Seanie Mac was born. I thought my infant/toddler days were long gone and all I really had to worry about before we left the house was that the kids had brushed their teeth, were all wearing pants, and went to the bathroom so we didn't have to pull over to pee a million times along the way.

Now that Seanie Mac is here we had to wait for his morning nap to end (because taking a cranky, non rested baby on an outing on purpose is like jumping out of an airplane without a parachute, you know it isn't going to end well), feed him, clean him up, change his diaper, then change his diaper again because he took a dump as soon as I put a fresh diaper on him, etc. It seriously never ends with this kid. This is the same baby who almost always dumps the dog's water dish all over himself just seconds before we're ready to leave (or toilet water...he doesn't discriminate; he loves both).

I was really nervous that the kids were going to conspire against me and all hell was going to break loose and I'd have to use my one phone call from jail to call my husband at work to come bail me out, but to my surprise, the kids were all super duper well behaved, and no, I promise, I didn't drug them before we left.

We walked around the museum, checked out the exhibits (even though they really hadn't changed much since the last time we visited), the kids played in the kiddie area, and we even walked through the gift shop without anyone throwing a tantrum or breaking something, although my oldest started to get a little squirrely over an overpriced stuffed horse, but I held strong because if I bought her the horse, I'd have to say yes to the stuffed rodents that my boys were holding up and waving just inches from my face. Besides, I'm pretty sure we already have some rodents living behind our kitchen stove. 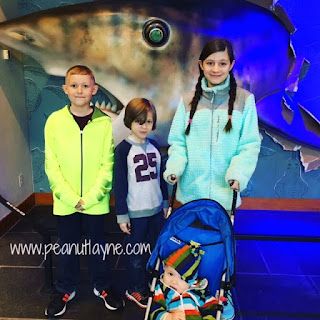 Seanie was irritated that the stroller suddenly stopped moving 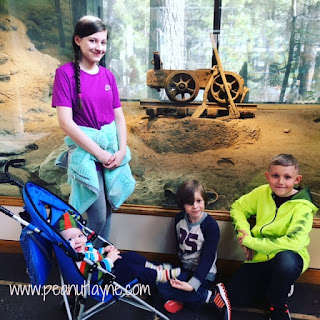 A pathetic attempt at a selfie...we really could've used a selfie stick! 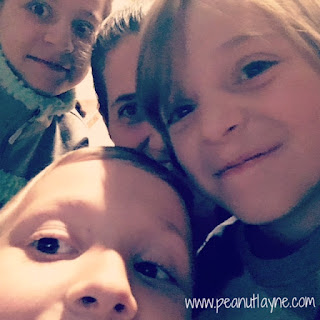 Peanut loved this volunteer dude...he talked his ear off 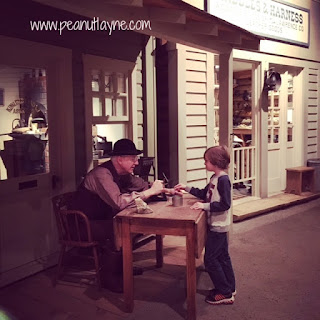 How I eat during PMS week 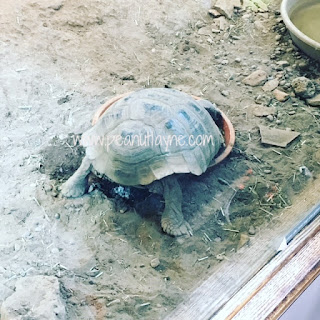 Seanie the rock climber.
What do you mean your ten month old can't rock climb yet?
Kidding, he's still on the ground 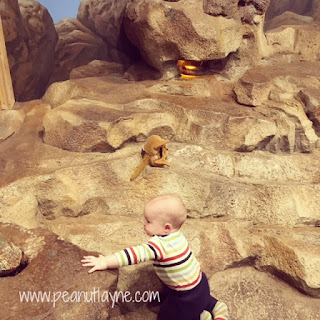 I'm really happy I decided to take them out of the house and let them burn off some steam instead of yelling at them from the couch to be quiet while they ignore me and act like wild dingos at a rave.  Plus this gave me some confidence to know that not only could I do it, but that maybe I should be doing this kind of stuff more often. Of course you know what this means!! The next time I take them to the museum alone, I'll turn my back for one second and Peanut and Mahlon will end up falling into the snake pit. But at least I can always look back and say, "Remember that one time, when I took them to the museum and it was a total success?"  Yeah, I'll always have that.

Posted by Peanutlayne at 1:29 PM