To buy or continue renting, that is the question

This house is falling apart, much like my life at the moment. I know, I know, a tad over dramatic for a Tuesday afternoon, but hey, I'm a drama queen, so just be grateful that you're not my husband. Right now we're stuck in a teeny tiny rental house (that we're paying way too much for), and everything seems to be going wrong with it all at once. That's typically how life seems to go though isn't it? When one thing goes wrong, there's usually another disaster lurking right around the corner.  I swear I'm just waiting for my husband's vasectomy to fail next...kidding! That is the ONE thing that cannot break down and you better believe we'd be taking a road trip to Portland with all four kids in tow, and marching into his Urologist's office for a full refund (we paid for his procedure out of pocket and it wasn't cheap)!!  And, once again, I'm totally getting off track! I'm supposed to be talking about houses, not my husband's private parts. Moving on....Luckily we don't own the house, so we aren't responsible for the repairs, but it hasn't been easy having repairmen in and out of the house for several weeks, especially when they always seem to come over during Seanie's nap time and I'm left to entertain a fussy, exhausted infant and a barking Vizsla, who suddenly thinks she's Cujo whenever someone new enters the house.


Our dog who acts tough but couldn't harm a flea...literally
she's completely useless at catching anything 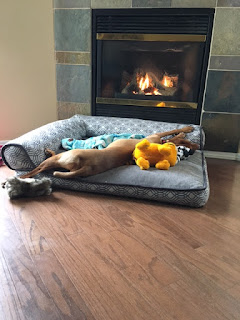 After three unsuccessful attempts to fix the hot water/wimpy water pressure issues (they even ripped up our master bathroom at one point and left it in total disarray for a week while still not being able to fix the problem), they finally replaced the hot water heater.  I do admit that it's been nice to not have to stand at the kitchen sink for thirty minutes waiting for the water to heat from cold to lukewarm. However, it's not just the water pressure that drives me bonkers. The dishwasher sucks, the carpet in the bedrooms is matted and gross, the bedrooms have plain white walls but we're not allowed to paint them, the oven handle keeps falling off, the floors are chipping in certain areas, and the toilet in the kids' bathroom overflows all the time. My husband is convinced it's because the kids use an arsenal of toilet paper, but I've used their bathroom before (out of sheer desperation of course, nobody ever uses the same toilet as their children on purpose), and it overflowed for me too.  It's gotten to the point where I know exactly how many seconds I have to get to the toilet to plunge it before I'm running to the hall closet to grab an armload of towels to throw down on the poopy water filled ground.

After being long term, serial renters, my husband and I have decided the time has finally come to buy our very first home. You'd think I'd be super excited about this process, but when you live in a very desirable tourist town, it's not nearly as exciting as you think.  To get the monthly payment where we want it, we have to lower our expectations quite a bit and unfortunately there aren't a ton of choices to begin with in this small town where housing options are extremely limited. It's even more depressing when you look at what you can get in other states for the same price (think mansion compared to tool shed).  Before we totally commit to buy though and sign on the dotted line, we still have a lot of really big, life changing decisions to make and since I suck at making decisions this could explain why my dreams have been nothing but natural disasters, violence, chaos and turmoil. For example, last night I was swept away by a roaring tsunami. Considering we live in Central Oregon, I have a much better chance of getting shot and killed by a deer hunter, but what can I say? Dreams are weird.

The main reason we haven't taken the plunge and purchased a home before is mostly because we have major commitment issues, at least when it comes to settling down in one place for the rest of our lives. My husband is an Air Force brat and gets stir crazy living in one place for very long.  In fact we've been in our current town for nearly eight months, and he's already thinking about where we should move to next. Needless to say we go back and forth about whether or not to continue renting, even though rentals are ridiculously expensive and hard to come by in this town, or settle down and buy something.  The amount of money we're throwing away in rent every year is pretty depressing. Plus, the rental we're in right now, just isn't going to work long term. Sure, we could stay here another year, but that's pushing it before we have to get a bigger place.  My husband and I are currently sharing a bedroom with Seanie Mac, our daughter has her own room and then Mahlon and Peanut share the third bedroom. The bedrooms are ridiculously dinky here, so half of the boys' belongings are currently in storage until we move to a bigger house.  Seanie Mac is nearing his first birthday and really needs his own room as soon as possible. He doesn't sleep all that great yet, and he's already accumulating quite a bit of baby crap, which is mostly stored in our living room for now. My husband isn't a fan of his living room looking like a BabiesRUs showroom.

And might I just add in here that after living in such a small space, I really don't get why tiny houses are so popular?  I'd personally rather remain being married, but maybe that's just me. My sister in law and her husband are permanent RV'ers and my husband and I joke all the time that we'd probably kill each other after just one week of being stuck in a RV or tiny house together, especially with our children. Okay, so it's not really a joke, because he would straight up get a frying pan to the back of the head the first time he spent an hour and a half stinking up our one and only bathroom, or left 900,000 half empty cans of LaCroix scattered all over the only counter top in the entire house which happens to be the size of pizza box and also doubles as an ironing board, your office desk and kitchen table. No thank you!

We've pretty much come to the conclusion that it just makes sense to buy at this stage of our lives, especially because the tourist town we live in will always be a highly desirable place to live. We can always sell later, or rent out our house should we decide to move elsewhere. So wish us luck that we don't become those annoying ding dongs on HGTV's House Hunters who complain about silly little mundane things like interior paint colors, ugly light fixtures or my personal fave, "lack of entertaining space" because seriously, who the hell entertains anymore? Well, okay, probably lots of you do, but we have no friends so there's one thing we can cross off of our wish list.