I know I know...I disappeared again without a trace. I'm seriously struggling big time to maintain this blog and deal with the most hyper active baby I've ever had the pleasure of raising.  This one doesn't sleep y'all and he never ever EVER stops moving. Seriously, you guys have no idea how crazy my little man is, but I'll post more on Seanie Mac later because I could seriously fill up an entire post on the nutty, asinine things this boy is already doing and he's not even a year old. What can I say? He's gifted.....


Toy bins are made for climbing apparently 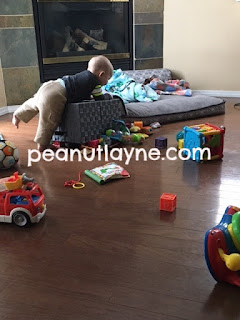 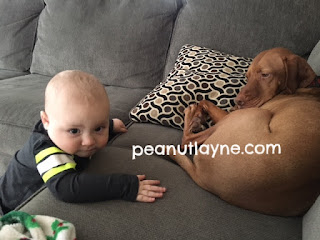 In other news I've decided that I'm going to start posting on my blog every single day (at least on the weekdays) to get myself actively writing again. I hope I don't run out of exciting things to post about, but then again I'm getting old so worst case scenario I can always talk about my changing moles, joint pain, and newest batch of grey hairs, right?

I'm so very sorry for not posting an update on the whole Mahlon/RSVP thing. I made a thank you slideshow with several pics and the video ended up being eight minutes long.  Rather than bore people to tears with the longest, slowest slideshow ever created (I seriously suck at figuring out how to use iMovie), I think I'll just post the pics on my blog instead. I will work on writing my post this weekend and have it up and running on Monday, and I'll try really hard to include a short video of Mahlon, either on the blog, Facebook, or both.  Mahlon is still begging us for his own YouTube channel and I know he's a charming, funny little boy and many people are interested in his life, but my husband and I haven't totally made up our minds yet. Part of me wants to shield him from the online world as some people can be unbelievably cruel while hiding behind a computer screen.  If we do allow him to start doing a weekly YouTube show, you guys will be the first to know.

Speaking of Mahlon, he is doing pretty great in case you're worried/wondering. He received an award at school (Growth Mindset) and he is so proud of himself, as are we. Academically he's doing amazing as well. As a former home school mom, I was so worried and anxious that he would be behind since he was thrown into public school as a third grader, but he's actually ahead of grade level.  He recently tested and got his upper green belt in Taekwondo not too long ago and life is pretty much back to normal for him, for all of us really. 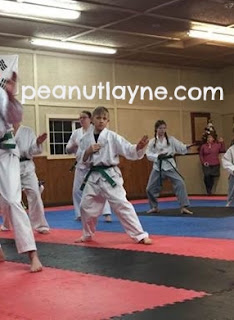 Mahlon and I still get recognized from time to time since we live in a small town and that's kind of weird (and scary since it forces me to be on my best behavior at all times), but I'm actually relieved that the hype has died down. Going viral was exhilarating and terrifying at the same time. Occasionally I get asked how I went viral and I'm dead serious when I say, "Sorry, I have no idea" because that's the truth. I really, truly don't know how I did it. I simply wrote from the heart and my thoughts and feelings just poured out into my post, and it got shared......A LOT.

Despite what some jerky asshat in NY wrote about me, I never intended to go viral and to be quite honest, I didn't embrace the attention as many others probably would have.  What most don't know is that I turned down several offers to be on TV, which could've potentially turned into something else for our family (a reality show for example).  Yes, I write a blog and I share a lot of personal stories about our lives, but I'm also a very private person and I suffer from social anxiety, and it's very difficult to overcome and deal with at times. When my blog post first went viral I had many moments of sheer panic and terror over having to read comments about me from judgmental strangers, having to answer my phone for interviews, respond to emails, etc.  I'm not good at that kind of thing and it's also why I've been lying low these last few months and just trying to get back to normal.  No, it's not how most bloggers would've handled it, and most probably would've loved the sudden attention and ran with it, but for me, I had so much anxiety, that I couldn't even pick up my Macbook for several weeks.

There are a couple of things I've been contemplating about lately and one of them is writing a book about my life (but I thought about doing that long before my RSVP post went viral so stuff it Gershie).  Our entire family has been through some crazy stuff over the years, some of it is juicier than a cheesy Lifetime movie. I suppose I could write about it here, but I save this blog for more important, tantalizing topics like my dysfunctional bladder, my arachnophobic husband, and my dog who thinks our hardwood floors make a fabulous toilet.  I don't know if anyone would read my book, but I would still love to write one even if my family and a few friends end up being the only willing readers.  Another thing I've been working on is directly related to the RSVP post, but it's more of a pay it forward/mission type of project. Will update when or if we can get something going. I do have someone willing to help me so that's a good start. Now if I could force my ADD brain to focus on something for more than a week, I'd be golden.

Anyways, I could ramble on and on but we have company coming over tonight and my toilets look especially gas station worthy at the moment, so I need to go clean them before our company goes running out of our house screaming.

Have a great weekend and I'll be back on Monday!!
Posted by Peanutlayne at 12:31 PM