It all started last year.  Our daughters decided to play soccer for the first time.  My husband is a die hard sports fan (mostly football).  Our entire fall schedule revolves around NFL and college football games. I wish I was joking. His teams are the Redskins and Seahawks in case you are also a die hard football fan and were curious.


This was us at a Seahawks/Redskins game in Seattle (in the rain and the cold)
The things we do for love.... 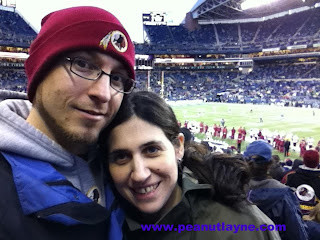 Soccer was always the forbidden sport in our home.  My hubby would make a face when I would buy the kids anything with a soccer ball on it. He would roll his eyes and make derogatory comments about soccer and how football (NFL) was superior.  I always thought his dislike for soccer was lame and stupid but whatever, i'm also not a die hard sports fan so what do I know (or care)?

Anyways, the more our girls got into soccer, the more my husband's attitude started to change.  Then one day he was asked to shoot a Portland Timbers match (he's a professional videographer/photographer). He came home from the match and kept talking about how amazing it was.  I was surprised he enjoyed it so much, especially since he never cared for soccer before, but he talked about it for a few days and then I didn't hear much about it.

Spring soccer season started in March. Our older daughter decided she didn't play to again. No biggie. It wasn't her thing.  However, our 8 year old, is hooked. She lives and breathes soccer these days.  I don't know what changed in my husband from fall soccer season to the spring, but holy crap, he has turned into soccer dad on steroids!

He got to shoot another soccer match a couple of weeks ago, although this time it was the Portland Thorns (women's professional team).  He ended up being able to get free tickets for the girls and since he was going to be down on the field shooting, this meant I needed to come along to chaperone. Goody. I was not thrilled as i'm not much of a sports person and I know jack squat about soccer except for the fact that I know you're trying to kick the ball into the net. That's about it. I was a gymnast and a tennis player growing up. I never played soccer.

We went to the match and i'll admit, I had a much better time than I was expecting. I wouldn't say i'm a soccer fan, but I don't hate it either and I guess that's a pretty big deal since i'm not a sports chick.  However, my husband has become completely, totally, utterly obsessed.  I'm talking Fatal Attraction obsessed with soccer.  He got us more tickets for last Thursday night's Thorns match and this time he didn't have to shoot the match so he would be watching with us.  My reaction was, "We're going on a weeknight? At night? In the cold and the rain?"   His reaction, "Hell yeah. It's gonna be awesome."  Okay then.

But it didn't stop at the ticket purchase.  Oh no!  The following day I got non stop texts about how he wants to purchase season tickets for the Thorns.  Season freaking tickets.  Holy shitballs!  Not only that but he was practically foaming at the mouth to text me all day about various Timbers matches that we could buy tickets for, and the price difference between the Timbers and the Thorns and which sections of seats we would want and holy poop i'm getting tired just typing this.  My response, was "Babe, I think you need to splash some cold water on your face and get some coffee.  Deep breaths. Pace yourself."

Thursday night arrived and the hubby was bursting with excitement.  We got there an hour early. I'm not kidding. A freaking hour early.  We wore our Timbers shirts because we don't have Thorns shirts yet.  Yes, I caved and bought a Timbers shirt since I figure i'll probably be going to multiple matches whether I want to or not.

While we were walking about Jeld Wen field and trying to kill oh say an extra hour of spare time, my husband started talking about all the things I need to order online.  A Timbers scarf, a Thorns scarf, various jerseys and t-shirts.   I already bought a Timbers shirt, is that not enough? Apparently not. We have to be completely decked out head to toe.

The game (or match or whatever) started and that's when the screaming and yelling began. I looked at him and shushed him. It didn't phase him.

and then there's my husband.  There's not much of a difference. 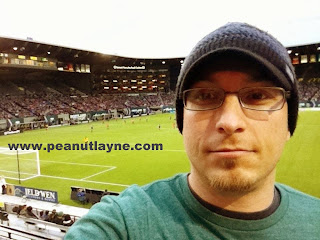 Our daughter had her final soccer game of the season on Saturday. It was our first and only loss. I think my hubby took it harder than she did. During the game he yelled, he cheered, he pouted when they lost. He even did the tunnel at the end of the game. Oh jeezus the tunnel! He's already counting down the days until summer soccer camp starts and then before we know it, fall season will start.  He even made a comment about how he would love to coach the girls next year, but he doesn't know all the rules since he didn't play soccer himself.

For some reason this image suddenly popped into my head: 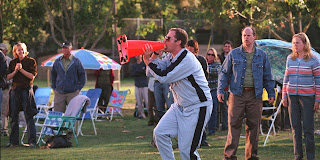 We spent our weekend watching the Timbers and then he also decided to watch other MLS matches because, well, that's how he is. Once he gets into something, he is all about it.

I'm really happy that now not only do our weekends revolve around football and UFC, but we can throw soccer into the mix. In my next life i'm marrying a sensitive ponytail man (yes, i'm making a Singles movie reference), who thinks sports are dumb and Steel Magnolias is the best movie ever made.