Well, it's official.  I'm the worst blogger in history. Yep, I am.  I'm lucky if I blog once a week at this point (on a good month).  Not to mention it takes me forever to moderate my comments so please don't feel bad if it takes me a month or longer to approve your comment.  It's not you, it's me.  ALL ME.  It's called laziness and it's contagious in our house.  I'm behind on writing blogs, reading blogs and commenting on blogs (geesh, do you think i've said the word "blog" enough?) so that's my goal for this week (to actually get blogging stuff done), along with losing 50 lbs. That's not too much to ask is it?

So, what has been going on in the Peanut Layne house you may be asking? Or maybe you're not asking at all, but who cares, because i'm gonna tell you anyways!  This weekend has been super exciting. Ok, so no, it hasn't.  Last night (Friday night), the husband and I put the kids to bed and partied, and by partied I mean we sat on the couch (separate couches because I need room to stretch out my legs, and the hubby hates the smell of my Bengay lotion) and watched a National Lampoons marathon on VH1.  The husband made a Dutch Bros coffee run which was super sweet but I knew exactly what that meant...he was going to expect sex for his good deed.  Yep, I saw right through his random act of kindness.

Before the sex the husband started complaining about not having any junk food in the house.  He had this brilliant idea to take some tortillas (I think they've been in the fridge since season 3 of Weeds...you know before the series turned to shit) and spread butter, cinnamon and sugar all over them.  He insisted I help him eat them, and since i'm not one to turn down sugar, I agreed.

Within about 10 minutes of eating the sugary tortillas of death, my stomach was gurgling and angry with me.  Just what you want when you're about to have sex.  I didn't have the heart to tell my husband that the entire time we were having sex, I was concentrating on bowel control.

Today the party continued as I had to run to Winco to buy groceries.  As I was walking out of Winco, I dropped our pizza face down on the parking lot ground.  Gross.  I got home and handed it over to the hubby and told him to check it for hypodermic needles before tossing it into the oven.

Speaking of the hubby he ditched me tonight so he could go a local pizza place/bar and watch a UFC fight with his buddies. Our 8 y/o daughter asked me as he was leaving, "He's not going to one of those root beer places is he? Cause those are really bad."  After I finished laughing I figured I would take this time to catch up on chick flicks but come to find out the husband set a bunch of parental controls. DAMN HIM!  Of course I hit the wrong button while cursing over the parental controls and it landed on Spongebob so my dreams of watching TV tonight have been shattered.

I wish I had more funny stuff but I got nothin.  My 5 y/o son said the strawberries I bought looked like butt cheeks.  The sad thing is, they kinda do. 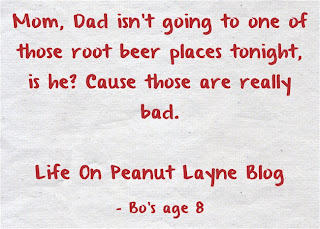 Posted by Peanutlayne at 7:32 PM