What do you do when you have an enormous phobia?  You face it head on.  And then you curl up in the fetal position and cry until you stop foaming at the mouth and can put a coherent sentence together.

This has been my life this past week, which is why I haven't been around to post.  I've been trapped in my own personal hell called downtown Portland.

My dear, sweet, wonderful hubby wanted to do something nice for our teenage daughter so he signed her up for a singing, dancing and acting class. Our daughter wants to be an actress/singer, plus that's just what we parents in Portland do. We sign our kids up for artsy fartsy stuff, while secretly hoping that they will rebel and go into a different career field that will actually pay the bills.  He signed her up at a local theatre on our side of town and assumed (you know what they say about people who assume things) that the class was going to be at the same location he signed her up at. Um, NO.

I was already nervous about driving her back and forth to and from the theatre when I thought it was near his work (actually it's close to Voodoo Doughnuts which I can totally live with), however, the night before the class on a Sunday night at 10 pm, I heard him say these dreaded words, "Hey babe. I was wrong.  Her class is actually downtown."  I froze.  I cringed. I prayed to sweet baby Jesus that he was just messing with me.  But he wasn't.  I fearfully asked him where downtown and he made a grimace and said, "Downtown, downtown. As in smack in the middle of the city".

I will admit, I freaked the hell out.  I technically already live in the city where we have a lot of heavy traffic, but it's not like downtown city traffic with one way streets and pedestrians everywhere.  I can literally count the number of times i've driven downtown alone and each time i've had a horrendous panic attack.  Hearing the news that I was going to have to not only drop her off around lunch time but pick her up at 3:30 so that meant TWO trips into the city every single day for TWO flipping weeks, sent me over the edge.

Needless to say I didn't sleep very well on Sunday night and by Monday morning I was ready to barf...I mean drive my daughter to her class.   I hit a few snags along the way, but it was a fairly smooth drive and thanks to my GPS on my iPhone, I figured out how to get home.  When I got home, I bragged to my husband about how victorious I was for making the round trip twice....TWICE PEOPLE!  He responded with a sly, "Oh yeah, I forgot to tell you that Mondays aren't that bad at all. Tomorrow will be much worse".  Say what motherfucker?

Tuesday rolled around and he was right. Traffic was bad. The streets are short and my extended minivan is not exactly city friendly, but I did it.  Then Wednesday rolled around and I nearly lost my shit.  I ended up flipping the bird while trying to merge onto the Morrison Bridge.  The other driver freaked out and slammed on his breaks and then refused to let me in.  I waited until he finally decided to move his arse into the right lane and then I merged over.  Then came the fun part.  Making it across those damn city street intersections!  The blocks are so short and traffic backs up so even though there is a green light, you can't go through the green light or you're stuck in the middle of the intersection like a sitting duck.  And people don't like sitting ducks shaped like giant ass Dodge Caravans that block the entire intersection.  NO, they don't!  In fact people get pretty snarly with you and shake their heads as they gawd forbid have to walk around your van while you are hogging up their precious cross walk.

So, yeah, i'm blocking the crosswalk while a group of rebellious looking youth (geez, i'm getting old and turning into my parents) start to walk in front of my van to cross the street. I must say that flop sweats and slip on shoes do not go together well.  I lost my grip on the break pedal and accidentally lurched forward at the group of street kids. It was a total accident and in reality I didn't really even come close to hitting them, but it scared me and i'm sure deep down they were scared too even though they had to act tough.  Scared or not they didn't find it very amusing and I probably came close to getting the poop beat out of me.  One of them stopped right in front of my van with her arms crossed in front of her.  She was really mad and I was a little scared because i'm not a fighter kind of chick.  I'm more of a cry and lose bodily functions kind of girl.  However, I have this anxiety/temper thing that comes out when i'm feeling really stressed so instead of ignoring her I held up my hands and waved them at her and mouthed the words "You can go now" and I rolled my eyes at her. I don't know why I do the things I do. Seriously. It was dumb and i'm lucky she didn't break my face into pieces.  Either way, I managed to get my daughter to where she needed to be and then I sobbed like a newborn baby when I finally got out of the city and had merged onto the freeway to head home.  Cause that's totally normal to cry when you get out of the city, right?  Right?  Okay, moving on...

Thursday's drive was actually not that bad.  I was starting to get my groove back and feeling like I was earning my city driving stripes and then Friday happened.  I was trying to merge onto I-84 West and I couldn't even merge because traffic was backed up onto the off ramp which basically means, "You ain't  going anywhere".  We sat in traffic for over 30 minutes because there was an accident that had two of the three lanes blocked.  By the time we passed the accident, the lanes just opened up and we made it to her class, but she was really late. Feeling stressed to the max, I made it out of downtown and I raced over to Trader Joe's, fought like hell for a parking spot and then drove to Winco cause when you're already in hell, why not just stay for awhile?  I barely had enough time to go home and unload all of the groceries before I had to drive back into the city to pick up my daughter.  Getting into the city wasn't so bad, but getting out was another story.  The freeway was a parking lot.  Luckily I know a shortcut thanks to my hubby so it could've been much worse. We had to stop at another store on the way home to get medicine because my 8 y/o broke her toe by doing gymnastics in the house (after I told her numerous times she was going to break something but no one listens to me) and I was a dummy and forgot to buy it earlier. I got home just before 5 pm.  I felt like collapsing onto the floor in the fetal position and drooling on myself, but my joints were throbbing so I lathered myself up with joint cream instead.

I admire anyone who can drive around big cities like it's no big deal.  It is a big deal for me.  I'm tempted to move to a small, country town out in the middle of nowhere where the only other residents are some sheep and maybe a couple of goats.   I'm also in awe of bus drivers.  They are like rockstars to me now.  Forget the Biebs.  Do you honestly think he could drive a gigantic bus in downtown Portland without plowing people over or peeing his pants?  I don't think so!  Seriously though, I would rather clean public toilets using my own toothbrush than to be a TriMet driver in Portland.  Okay, so maybe I would use my husband's toothbrush instead, but still, that would be the most terrifying job in the world. Forget Deadliest Catch (okay don't cause I freaking love that show) but there needs to be a show about bus drivers who drive around in the city.  Is there a show like that?  I would totally watch it, on my couch with my brown paper bag and the flop sweats.

This is a TriMet bus in case you're wondering what the hell TriMet is (image courtesy of Google): 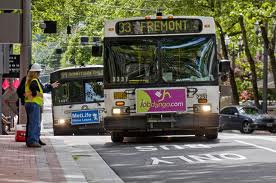 Five days of this torture left (not that i'm counting down or anything).
Posted by Peanutlayne at 5:37 PM