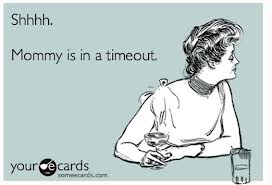 Yesterday was one of those days where I kept checking Facebook like a bazillion times, hoping for some excitement, but apparently boring people have boring friends because there wasn't any good drama to speak of.  Rather just pictures of cats or food or cats eating food...sigh.  Of course it's highly possible that i've been blocked from most of my friends. I don't really blame them.  I'm kind of a whiner.  I know people hate the whiners on Facebook, but I personally have a soft spot in my heart for the negative nellies.  I'm more of a "If you can't say something nice, then come sit next to me" kinda gal.

I was so bored that I decided I was going to grab the bulls by the balls and pay some bills.  Then I realized that we have several major bills all due this pay period and my hubby doesn't get paid for almost two weeks and I nearly vomited blood from the stress.  So, now i'm bored and broke.

My boredom continued throughout the day and by the time my husband got home from work, I was excited to finally have some adult interaction.  However, my excitement was quickly squashed when I looked to my left and saw him snoring away on the couch, thus leaving me on my own to get his spawn into bed.  That hard working bastard who thinks he deserves a nap!  Geesh!!!!

To top it off i'm almost out of Bengay and i've been in a crap ton of pain lately.  My medical problems suck but since we owe about five kidneys worth of medical bills, I can't really afford to go back at the moment.  I've been lathering myself up with enough Bengay to cover the Golden Girls.  Last night Peanut turned to me and said "Momma, you really stink".   Bo's also had an endearing comment for me, "Mom, you smell like gorgonzola."  Alrighty then.  So i'm boring, broke, in pain and I smell like stinky cheese.

The worst part (aside from smelling like gorgonzola), is that I feel guilty for not being one of those perky moms with tons of energy who dresses her kids up in matchy matchy outfits and takes them to the zoo by myself.  Have you ever been to the Portland Zoo? It may not be the San Diego Zoo, but that son of a biotch is huge!  I can maybe walk through the entrance and then i'm done.  I don't have the stamina nor the patience to attempt outings with my three youngest kids on my own (my teens are gone for two weeks).   I would be on the evening news for sure.

"Tonight's top story....A mom of five got eaten by a gorilla as she fell into his cage while attempting to tie her son's shoe.  Investigators are still trying to piece it all together and many questions still remain like why couldn't her son tie his own shoes?  Zoo employees on the scene believe the gorilla mistakingly thought she was a piece of gorgonzola cheese."

But anyways, yeah, i'm kind of a klutz.  For example last night I tried to rub some lotion on my legs as I attempted to hoist my giant leg onto the counter.  Just when my hubby was starting to get turned on and had high hopes of getting lucky (yes, sadly when you've been together for a million zillion years, all it takes is a bare leg and the hubby takes that as a sexual advance), my foot slid off the counter and I smacked my face on the counter on the way down to the floor.

Today has been much better though.  My kids woke up screaming for brownies.  My husband said no as he was walking out the door and then looked at me and said, "It's up to you."  Great, just throw me to the wolves why dontcha?

Then the phone rang.  It was my dad who sounded like something was wrong.  I started to panic as he is the only parent I have left and he already had prostate cancer about 15 years ago.  He started off the conversation with, "I have some bad news".  I braced myself and took some deep breaths.  Then he continued with, "I have to go to Portland to do some judging" (my dad is a retired circuit court judge but still works on occasion in case you're wondering).   I nervously asked him, "Ok, so what's the bad news?"  He responded with, "That is the bad news. I'll be in town for a week."   Really, dad?  I mean you couldn't just say on the phone that everything was okay?  My dad thinks he's a comedian (kinda like me), but he's not funny (kinda like me), so his jokes are never funny and are typically inappropriate (now you know who I got it from).  After I recovered from nearly having a heart attack, we started talking about other stuff.  Then the kids realized I was on the phone and they decided that was the perfect time to start screaming about brownies. 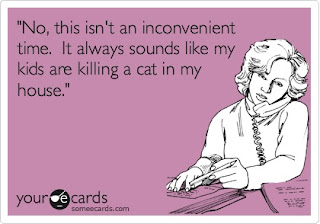 The screaming and chaos got my dad off the phone real fast and could possibly explain why he would associate coming to visit us for a week as "bad news".  I would love to see what's in his suitcase. Probably a lifetime supply of ear plugs and Tums.   I don't know, but I must end this now as my son is yelling, "Mom, come wipe my butt". Apparently tying shoes isn't the only skill we need to work on this week.