I know it's been a while since I last posted, but hey I said I was going to take a break from blogging and darn it I meant it, lol!

We recently went on a fabulous family vacation to Disneyland in mid June with my sister in law and her family.    Both the hubby and I were a nervous wreck about how much work Peanut was going to be since he's only 2.5, however, he was fantastic!   He loved the rides and screamed out "Wheeee" at the top of his lungs.   I'm telling you this boy has NO fear whatsoever and is the bravest little daredevil i've ever laid eyes on, lol!   Our 4.5 y/o son "M" was the most challenging, along with our 7.5 y/o daughter "Bo's".  Despite the rough patches (and believe me we had some rough patches) we had a lot of fun and wish we were still at Disney.  We spent 3 glorious days at Disneyland & California Adventure.  I'm not going to lie the first day was rough.   Oh what the heck, i'm just going to type out a brief Disney trip report (cause you know you wanna read it, lol).

Day one: We rented a stroller for Peanut, but figured M would be okay without one (not a good choice, but sounded like a good plan at the time).   We started off at Disney's California Adventure Park (DCA) because we were staying at the Grand Californian (amazing, gorgeous, fabulous resort by the way), and we had easy access into DCA park.  We headed over to grab some fast passes for the new Cars ride (which I didn't get to ride and i'll explain more on that later) and then headed over to Toy Story Mania because we are a Toy Story loving family.  M was fine the first 30 seconds of the ride but quickly decided he wanted off.  It was dark, loud and had neon flashing lights and it was just too much for my sensory kiddo.  He was screaming at the top of his lungs and trying to open the handle bar to jump out of the ride…EEK!   Luckily it was very noisy on the ride and no one else heard the commotion, lol!   After the ride he was done with Disney and we had just started so yeah you get the picture, lol!   He was throwing himself on the ground and saying he wanted to go home.  He was screaming & crying and refusing to go on any rides at all (there was just NO convincing him and we tried it all).   The hubby and I sent Bo's and the teens with my BIL & SIL so they could at least enjoy themselves while J and I stayed behind with M & Peanut.   J and I took turns going on some smaller rides with Peanut.  He absolutely loved it!  He was squealing with pure delight and grinning from ear to ear.   After each ride was over he waved to everyone around him and shouted, "Bye bye, bye bye" over and over again.  So cute!!!!  M continued to be a turd.  There was just no changing it, lol!

Here's M on the first day…
he's clinging to the fence and saying,
"I just want to go home" 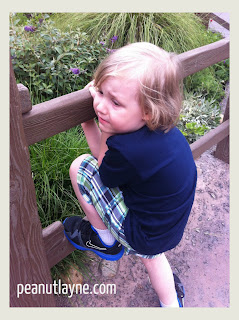 Soon after we met up with the rest of the group and it was time to head over to Cars Land to use our fast passes.  The fast pass line was about 30 minutes long.  It was quite obvious M was not going to make it as he was in full meltdown mode at this point so I decided to take him & Peanut back to the room and my BIL offered to help me since he wasn't feeling very well and needed a break.  This is where things get ugly and i'm still quite humiliated over the way things went down. M refused to walk with us to the hotel.  He sat on a bench and refused to walk. I was pushing Peanut in the stroller so I couldn't carry him, plus M is 55 lbs.   My BIL pushed Peanut in the stroller and I tried to put M on my back.  M with his low muscle tone slid right off my back and both of us flew backwards onto the concrete and I took a nasty spill onto my back, landing on top of M.   My hip bone (and butt) slammed into the concrete and I felt immediate pain.  M appeared to be okay, except for his fingers were a little scraped.   My BIL switched and handed me the stroller and he lifted M up.   M went into full meltdown mode and was kicking and screaming and shouting "Leave me alone.  Put me down" at the top of his lungs.   I followed quickly behind BIL and gave that, "Don't F with me" look to all of the shocked onlookers, lol!   We pushed our way through the crowds and somehow made it back to the hotel.  I honestly don't know how in the world my BIL managed to carry him that far.   M was kicking and screaming like a maniac and flopping around like a freaking fish out of water in BIL's arms and did I mention he's HEAVY!   I was so impressed with how calm he remained throughout the whole ordeal.  I mean here he is on his vacation and he's carrying someone else's child across a busy, crowded park while getting kicked, punched and screamed at by a crazy 4 year old throwing a gigantic meltdown. If I was him I probably would've put him down and said "He's all yours", lol!!!!  So a huge thank you to my awesome BIL for not abandoning us in the middle of DCA, lol!!!!    We got back to the hotel and I had a chat with M about his completely unacceptable behavior in our room.  He spent some time on the bed in time out.  Soon after the rest of the group was finished with the new Cars ride (which they said was okay but not spectacular in case you're wondering).   We took a break from the park and let the kids go swimming which seemed to perk them right up.  By this time I was really feeling the pain from my nasty fall onto the concrete and my hip & butt was pretty bruised.  Getting into the water was just what we needed.   After swimming for a couple of hours we got dressed and took the kids back into CA and saw some of the shows.  Peanut & M loved the Disney Jr show.  It was so cute and M's favorite "Jake" from Jake and the Neverland Pirates was hanging out outside of the theatre so M got a picture.  He was SO excited and made sure to tell everyone that he got to meet Jake.   After dinner it was back to the room and we put the little kids to bed.   J and I switched off with babysitting duty so we could go on the big rides while the other one stayed in the room and watched the little ones.


Day Two and Three: We took the kids to Disneyland and we had high hopes for day #2 but the kids were just whiny and fussy (wait I should rephrase that…our youngest 3 kids were whiny and fussy, lol).  We did have M in a stroller this time so he was much easier to manage, but then Bo's upped the ante and was being a stinker.  Sometimes it feels like we just can't win, lol!   We split up into groups on the 2nd day and my BIL & SIL were gracious enough to offer to stay at the hotel after lunch to take the younger kids swimming so that J & I could finally go ride some of the big rides that we couldn't ride with the younger kids.   We jumped on that offer and had a fabulous time walking around Disneyland with the teens & my nephew.  It was a really awesome day. Disneyland is just so much fun :)   The third day was spent at both Disneyland & California Adventure. We took the kids over to Tom Sawyer's Island which wasn't quite what I remembered from my childhood trips to Disneyland, lol! We figured we could just find a bench to sit on and relax while the kids ran around and played…WRONG! There were steep hills and sharp rocks and loose dirt.   Peanut & M both fell down and hurt themselves right off the bat and then Peanut ran head first into one of the rock caves and practically cracked his noggin open.  I was a nervous, sweaty, yelling mess and felt like I was going to have a nervous breakdown from the stress.  Yeah, this was not my favorite part of the trip, lol!  However, the rest of the day went much better.  J & I took the younger boys back to the Disney Jr show in the afternoon and once again M got to meet Jake and have multiple pics taken with him.  We mostly stayed together as a group and it was just so much fun.  In the evening we discovered the Redwood Creek playground at DCA and it was just awesome! I could go on and on for pages about this place, but I will spare you the details.  If you do go to DCA you MUST find this playground and let your kids run wild.  It's so much fun and it was by far the highlight of the trip for the younger kids.   Just when it seemed like the kids were FINALLY getting into their Disney groove, it was time to go home….sigh :(    Despite all of this,  I will say that this trip gave us a renewed sense of hope though that we CAN successfully travel with our 5 kids.  We are even talking about taking them back to Disney (not sure if we'll attempt to do Disney World or Disneyland again) in 2-3 years.  We just had so much fun and all the kids can talk about is how badly they want to go back, lol!  The kids did so much better on the long car trip than we ever thought they would.   Seriously, these kids were troopers! We had many LONG days of driving.   Our longest day of driving was about 12 hours.   We did take breaks to eat and go to the bathroom, but that's about it.  Thanks to the help of portable DVD players, we survived! LOL!  We've been home for a few weeks now and just trying to settle back into our normal routine.

This is what happens when your 4.5 year old son fails to understand that the sword doesn't actually come out of the base….you can watch the progression…
Notice he's smiling here? 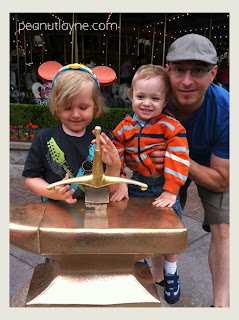 Hmmm, starting to get a little frustrated here, lol 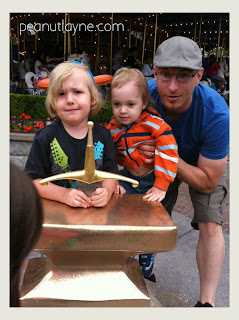 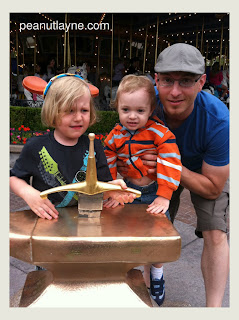 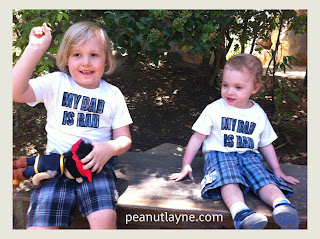 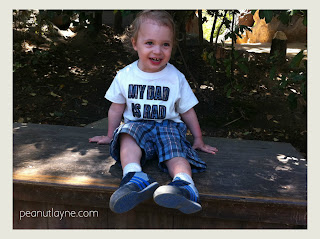 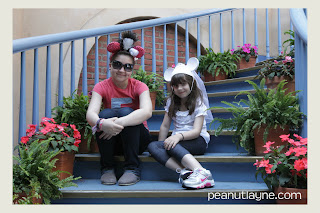 Wow, it's our teenage son and he's smiling!
Disney IS the most magical place on earth! 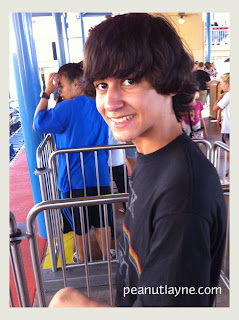 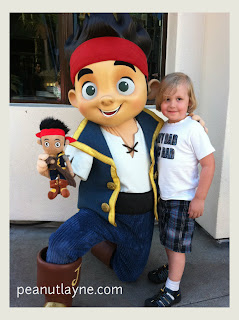 The whole fam…notice M in this pic? lol!!! 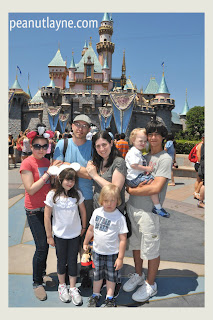 Posted by Peanutlayne at 3:01 PM

Email ThisBlogThis!Share to TwitterShare to FacebookShare to Pinterest
Labels: iphone photography (contact me for rates), life on the layne