Guest Post by Karen at Baking In A Tornado


Can I have the microphone turned on? And the spotlight over here please? (squinting) Thank you. Hello? Hello? Can everyone hear me now? Oh, good. 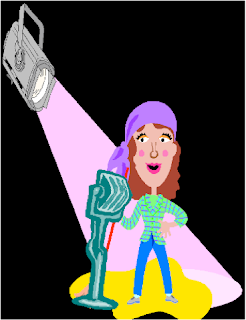 I know my voice is a little shaky, but I’m really nervous. This is the big leagues and today is opening day. I’m visiting here on Peanut Layne and I want to do my friend proud. At the very least, I hope to do no harm.

OK, introduction: my name is Karen and I blog over at www.BakingInATornado.com. Let me start off by apologizing. I know it’s disappointing to expect to see the Star and end up with the Understudy, but lucky for me you didn’t buy your ticket so I won’t be responsible for your refund.

So Peanut Layne is out of commission for a while (no, I did not hurt her to get a spot on her blog). In her place, I’m offering you a smorgasbord of posts and bloggers. We’ll try to hold down the fort until she returns. Stick with us I’m just the opening act, warming up the audience, as it were. It’ll get better, I promise.

Peanut usually tells you about the goings on in her home, which are always hilarious. My kids are now teenagers, and as much as I love embarrassing them in their current life forms, the story I’m sharing today is from years ago.

Let me start by telling you that we live nowhere near any family. We’re from the East Coast, but my husband was recruited by a company in the Midwest, so ten days after we got married, and on the promise that it would be only for two years, I packed up two years worth of make-up (in case you can’t buy make-up in the Midwest) and moved. Two years is now around 20, but that’s a whole other story.

Ever since moving here, family visits went from the Saturday afternoon barbecues of my youth to a two week stay . . . in my home. It’s an adjustment. When YOUR family comes, you sort of know what to expect because, well, you’ve lived with them before. When the in-laws come, that’s a whole different can of . . . something. What I learned is that when my in-laws were here, it was a good idea to have something scheduled for my husband and father-in-law to do to keep them busy.

When my kids were a baby and a toddler, my Mom bought them their first swing set. It was right before my in-laws were due for a visit and I couldn’t have been happier. My mother-in-law would help with the baby and my husband and his father could build the swing set. 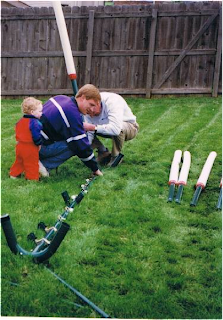 It was a metal swing set and had all the bells and whistles. Each day the men would go out back. My father-in-law would squint at the directions, my husband would search through 7 billion pieces that looked nothing like the pictures of enclosed parts, and my toddler would grab hammers and wrenches and take turns banging on the metal, banging on his father’s toes and banging on his grandfather’s kneecaps.

For five long days my mother-in-law and I watched out the window, laughing till we cried, as the older men tried to get that thing standing and the little one tried to kill them. 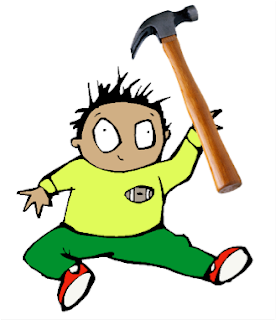 And on the fifth day, the sun rose in the East, and as it set in the West, 3 tired men approached bearing gifts. OK, it was the leftover bolts they couldn’t figure out what to do with, but the swing set was up. And it was a beauty. They were so darn proud of themselves.

The next morning while admiring our beautiful new swing set, we noticed over the back fence, the neighbor and his Dad putting up a swing set. The exact same one. Two hours, three tops. I bet there were no pieces left over, either.

So that’s it for today. Please come back often to see who’ll be filling in next. And if you’re still looking for a refund for today, I’ll get Peanut Layne’s address for you . . .