This is the third Secret Subject Swap i've participated in now (I think), created by Karen at Baking in a Tornado.  16 bloggers came up with a subject or prompt for another blogger and in turn we were assigned one to blog about as well. Today we're spilling the beans about our secret subject.

My secret subject was "I will NEVER again take my kids to the...." by http://dinoheromommy.com

My first thought was, "Wait, I only get to pick just one?" When you have 5 kids every single outing is a circus side show. I'm the frazzled mom who looks like I should have the Supernanny and a camera crew trailing behind me taking notes on my multiple parenting failures and faux pas.

Honestly I try to leave my kids at home as much as possible. I go grocery shopping at night when the kiddies are fast asleep. I go to the post office, well never. Ok, only when my older kids are home to watch their sibs. The only time i'd ever take my kids to the post office is if it suddenly became legal to mail them to their grandparents in California for a surprise visit.

So I started thinking, "Hmmm, when is the last time I took my kids on a disastrous outing, where I was knee deep in the pits of hell?" Ding, ding, ding! It didn't take long to think of one and a Taylor Swift song suddenly popped into my head....

We eeeee are never ever ever going back to Walgreens. Like ever.

The day was Dec.8th and my hubby was away in Seattle at a UFC fight for his birthday while poor little old me was left to deal with the 3 youngest kids alone. My teens were gone at bio dad's for the weekend. I was really truly on my own for the weekend. Gulp! To top it all off my 8 y/o daughter had a birthday party to go to in a nearby town. No biggie right? All I had to do was load up the boys and drop her off at the party. Piece of cake! We had already purchased a present a couple of days before the party (check one), wrapped it (check two), and mapquested the location (check three). Dang this momma was on fire!!!  We were good to go, so I thought.  I casually checked the invite one last time for good measure and that's when sheer panic set in. It was a joint sibling party and we had only bought ONE gift! How could I have missed this?!

Since the siblings were several years apart in age it wasn't like they could share a gift, plus I didn't want to be the cheap bastard showing up with the ugliest, crappiest minivan in the entire school district with one gift. So I had two options. Learn origami in 15 minutes with a piece of already scribbled on notebook paper or go to the store with an 8, 5, and almost 3 year old. I tried to make an origami duck but it looked like a vagina that used to be a penis but then went through a sex change. I couldn't show up at a party with an obscene gift and a broke down minivan that hasnt been washed since, hmmm, I honestly can't remember. Okay option two it was!

I loaded up the 3 Musketeers and off we went. I made sure to give the, "Remember, we're only going to the store to buy a birthday present for Ellen.  That's IT. I'm not buying you guys any toys, candy, food items, or anything else. I don't care if they end up having a Chia Pet shaped like Spongebob. I'm not buying it so don't even ask."  They nodded their little heads in agreement and gave me their solemn oath, "We'll behave mom, we promise." Apparently my kids are gearing up to be great politicians someday.

The closest store to us was Walgreens and since their toy selection sucks, I figured it would be a safe bet. I really shouldn't bet. Ever. My daughter Bo's quickly found a small pink glittery unicorn for Ellen and all was going well until my son looked up and saw a Mr. Toad plush from Super Mario Bros., something he's been asking for and wanting for a long time. I took a deep breath and prepared for battle.

My 5 y/o, "M" immediately squealed and placed Toad securely under his arm. I knew I was in trouble. I tried to calmly explain to M that Christmas was in a couple of weeks and that we weren't buying Toad today. I reminded him on his oath he had taken just a few minutes prior to entering the store. I reminded him of my "We're not here to buy toys" speech. This rationale might've worked on say a 30 year old, but my 5 y/o responded with, "No mom, we're buying him TODAY." Hmmm, not the reaction I was looking for. I once again told him to put Toad back on the shelf because we had to leave to get ready for the party. This time he proceeded to take off running around the corner while wailing, "NOOOOO, I WANT TOAD!!!" at the top of his lungs. I managed to run around the aisle and grab him and I felt the heat rise to my face. I could feel the disapproving looks from nosey shoppers. Yes, I was the mom with the bratty kid throwing a ginormous tantrum and it sucked!

After a few more pathetic attempts to try and pry Toad out of his kung fu grip, I began to feel defeated. I desperately needed back up. I needed my husband who would've simply picked him up and carried him straight to the car. But I was alone.  By this point I was humiliated, frustrated and not to mention, almost late for a party!  Peanut was happily playing with toys and jumping around in the aisle. My daughter was still clutching the small stuffed unicorn for Ellen. "Okay one kid out of three acting like Satan. I can handle this", I thought.  "I'll just buy him the stupid $8 mushroom and we can get the hell out of here! Damn those rich bastards who invented Super Mario Bros!"  I suddenly felt an urge to fly to Japan and kung fu some Japanese butt cracks! To make myself feel better I tried to reason with myself that I was doing the right thing. "You were going to buy him that Toad anyways. What's one little early Christmas present really gonna hurt? I'm not being weak, I just need to get out of this mother f@cking store!"

I told the kids it was time to go. Peanut and M start trailing behind me.  "We're gonna make it out of here" I start telling myself. Not even 2 seconds later I hear, "MOOOOM" coming from my 8 y/o. "You're buying M that toy? That's not fair! If he's getting Mr. Toad then I want this unicorn".

What the F?!  Who in the hell has kids on purpose?!

I was screwed. No way was I buying a toy for Ellen, a toy for M and a toy for my daughter.  Did I mention Walgreens toys are grossly overpriced as it is?  I was angry. Like commando mommy angry. I grabbed the kids (who were all 3 wailing in perfect harmony) and drug them into the nearby aisle, which luckily contained laundry detergent instead of toys. I plopped their little hineys down on the cold cement floor. I got down on their level and threatened them with their lives (ok I didn't) but they knew they had pushed me over the edge as all 3 sat staring at me with wide eyes. Toad was successfully removed from M's kung fu grip and was now sitting next to some Magic Clean Erasers on the top shelf of the cleaning aisle.  An employee walked by and gave me that look like "You're still here?" I gave him the, "You say one word to me and I'm shoving this Swiffer so far up your ass you will be mopping the floor with your teeth" kinda look. He quickly looked away. Smart man.

After what felt like an eternity we actually made it up to the checkout counter.  I could see the double doors that led to the outside. I felt like a prisoner who was seeing a glimpse of daylight for the first time in months.  I plopped the silly looking unicorn on the counter and quickly pulled out my debit card.  "I had won this battle. I rock. Oh yeah, I'm the master" I told myself.  My celebratory thoughts were disrupted by the cashier, "Oh wait. There's a coupon for that unicorn."

Meanwhile I'm doing the starfish with my arms extended straight out at my sides with a toddler boy attached to each arm as I leaned forward while trying to block the candy bins with my droopy breasts. "No, it's fine" I tell her. "I'm kind of in a hurry."  Not picking up on my cues that I'm about to bop her over the head with a Pillow Pet she starts asking me questions about my name, address, phone number. At this point I didn't even know my own phone number. "Why do you heed to know this?" I ask her. "I'm signing you up for a rewards card. You'll save $4 off the unicorn".  I once again tried to tell her to forget it. I just wanted to pay and go.  She continued to ask me questions.  This lady was not going to stop so I gave her all the info in between screaming, "M put down the gum. Peanut drop the beef jerkey. No, Bo's we don't need a personal mustache trimmer."

After what felt like a good 10 minutes of giving her all of my personal info that the douche standing behind me was probably adding into his phone so he could steal my identity and drain my bank account, she hands me back my debit card and says, "I'm sorry maam. Apparently that discount is good on all stuffed toys except the unicorn." 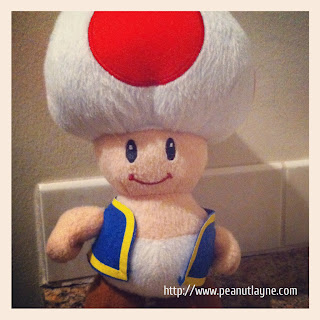 And here's a picture of our lovely Mr Toad, courtesy of Santa, who got the distinct privilege of driving to every single flipping Walgreens in Portland just 2 days before Christmas because she waited until the last minute to go back and buy him.

Posted by Peanutlayne at 7:00 AM