A simple trip to Burger King with three young kids 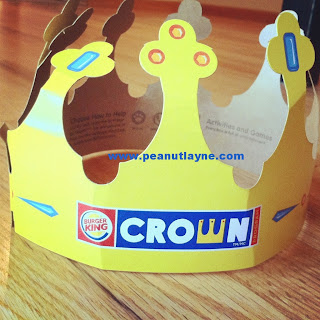 It was Friday night, and for many of us divorced parents, this means it's time for the Friday night fast food exchange.  I drive an hour each way twice a month to meet my ex for his weekend visitation.  I usually wait until my husband gets home from work so I can leave the younger kids home with him, however, this particular day my husband was running late, and he was just pulling into the driveway, as I was leaving.  I could've left the younger kids home with him, but I could tell by the look on his face, he had experienced a long, stressful day at work, and the younger kids were already excited about going with me, so it was too late to back out at this point.

We drove an hour to Burger King in the pouring rain.  I made the exchange and dropped off the teens, and found myself sitting in front of BK at dinner time, alone with three kids, all under the age of eight.  I was stuck.  They were like a pack of hungry wolves, and there was no way I was getting out of taking them inside to eat.

I started unloading the kids in a military fashion (AKA, i'm sweating, stressing about them stepping out of the van and getting hit by cars, yelling, pulling out my hair, etc).  We get into the restaurant and start ordering food.  This is quite a process.  The kids are yelling out, "I want a cheeseburger.  No chicken.  No, a cheeseburger.  Do they have cheeseburgers here?"  The young cashier has a nervous, constipated, "I'm never having kids" smile on her face as she tries to punch in their orders, while having to erase and change stuff a billion times.

We find a place to sit. I'm waiting for the food and silently praying for them to hurry up.  Don't they realize i'm alone with three young kids?  The kids made several trips to the beverage station to grab napkins, ketchup, and straws.  As soon as one kid came back to the table, another one would have to go get something because, "Hey, I wanted to grab the straws. That's not fair".  Meanwhile i'm looking at the counter and silently screaming, "JUST GIMME THE DAMN FOOD ALREADY".

We made it through dinner.  Of course my food was stone cold as I opened straw wrappers, refilled drinks and got them all situated.  And then repeated, "Just eat your food" more times than i'd like to admit.  Then the cashier who had placed our order brought the kids crowns to the table. I smiled and thanked her, but secretly was cursing the day she was born.  Three kids with three cheap, crappy crowns that never stay fastened, means a throbbing migraine for mommy. The worst part of the trip was coming up and I was loading myself up with caffeine and carbs to prepare.  The departure.  This part always sucks, no matter how carefully you plan it out.

I started gathering up the cheap, crappy kids' meal toys, garbage, uneaten food, etc.  I'm grabbing drinks and trying to juggle things like a clown and failing miserably.  Since we were parked right out front I kept thinking, "We just have to make it out the door, and we'll be okay".   We get out to the van.  I'm trying to unload drinks into cup holders, get wiggly kids into car seats, when I hear the five y/o say, "Mommy I have to go to the bathroom".  A chill ran up my spine.  My eight y/o pipes up, "Me too. I have to go to the bathroom".  Fabulous.

I get the kids back out of the van, yell at them to get up on the sidewalk before they get hit by a car, etc.  We go back inside as the kids run down the narrow hallway to the bathroom.  We go into the handicap stall since there was no one there.  Judge me if you dare.  I had three kids and was 60 miles from home. I'm hanging on by a thin thread my friends, a thin thread!  My eight y/o who is one of those rule sticklers was having a cow, "But mom, the boys are in here.  This is a woman's bathroom.  They can't be in here mom!"  The five y/o sits down to pee, then the eight y/o and then me.  Peanut kept unlocking the door while I screamed at him to knock it off and tried to explain that, "Mommy is naked" which resulted in all three kids hysterically laughing and shouting out, "Mommy's naked" although Peanut's came out as, "Mommy maked".

The toilet had one of those automatic flush systems except it must've thought you could pee in three seconds because it kept flushing and then you'd get a disgusting douche of public toilet water shot into your cooch.  My five y/o son kept touching the garbage pail that holds the sanitary napkins (you know period pads and Tampon wrappers).  Even after telling him, "Son, those are deeesgusting and have blood on them" he still continued to play with the lid on the garbage lid and then touched his face. Sometimes there are just no words. No words.

We somehow made it back into the van.  I got them buckled.  They cried, they complained, they asked where their crowns were, where their toys were, where their drinks were, etc.  I slid into the driver's seat and took some much needed deep cleansing breaths.  I was in the freaking clear.  I could drive these little heathens, I mean darlings home to my husband whom I was now ready to groin kick for happily sending them off with me, ALONE!

I reminded the kids that once I started the car and got onto the freeway, I wouldn't be able to pick up fallen toys so they'd better hold on to them.  Not even five seconds after merging onto the freeway I hear a plopping noise followed by a scream.  A dropped toy.  As I continued to shout to the backseat that I was NOT able to get the toy, I start getting drink requests, as their drinks were up front in my cup holder.  Again I explain i'm not passing drinks to the backseat.  Next it was, "Mooooom, my crown won't stay on my head. It's broken. Waaaaah!!!"

My head was pounding, my ears were ringing, when I stumbled upon one of my favorite radio stations that was playing all 80's music and this radical song was on the radio:
Suddenly the drive was not so bad, although I could still hear the kids in the back yelling out requests, arguing over stupid stuff, and complaining about dropped toys and broken crowns.  I turned the radio up a little louder.  Burger King may have kicked my butt, but I was king of this minivan, and it was time to take back my crown.

Posted by Peanutlayne at 9:25 AM