Weekends at the Peanut Layne household are peaceful, quiet, and tranquil.  We relax, reflect and spend quality time with each other.  And then we wake up.  Seriously.  It's more like the hubby and I sit on the couch like zombies, drooling on ourselves while the kids re-decorate our house into a big ol pile of shit sticks.

This weekend was certainly no exception.  The hubby and I always have good intentions going into a weekend.  We talk about how we're going to seize the weekend and get out and do stuff.  But then the weather usually ends up sucky, the teenagers bail to hang out with friends, and the 8 y/o has a soccer game and before we know it, Sunday has arrived.

I'm personally not a fan of Sundays.  It's a dreadful reminder of a new week full of responsibility. It's still technically the weekend, but it doesn't feel like the weekend because Monday is looming over your shoulder.

Our Sunday went a little something like this: I woke up around 9:30 ish.  The hubby probably didn't get up until almost noon.  We spent most of the day sitting on the couch discussing what we should do, but didn't actually do any of it.  We decide on pizza for dinner since I didn't do the weekly grocery shopping yet and i'm too tired to cook.  The hubby gets a brilliant idea that the kids should go pick out Redbox movies on the computer.  He tells them to reserve them online, and he'll go pick them up.  Five kids on one computer equals lots of screaming, shoving, yelling over each other, etc. I feel like I just caught a glimpse of what the deck of the Titanic must've looked like, when people realized there wasn't enough boats. Total chaos.

Somehow the movies get rented, pizza gets cooked, and the kids eat dinner.  They retreat into their rooms to watch their movies.  The hubby and I hope this means we'll get a few minutes of peace and quiet. The hubby and I were wrong.

A few minutes later we hear screams coming from our bedroom.  Our 5 & 3 year old sons were supposed to be lying on our bed watching Hotel Transylvania.  Instead our 5 year old comes running down the hall with a bloody nose.


Apparently Peanut had climbed up onto our massive headboard again and was doing a move that resembled something like this…... 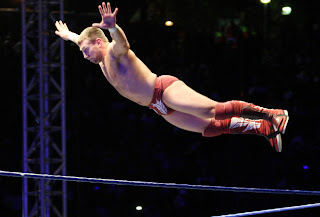 while using his older brother's face as a landing pad

We play paramedics, get the nose cleaned up, and get the boys tucked into bed.  All is good for about 30 seconds.  This time Peanut is screaming that he hurt his elbow (on his brother's leg).  Movie gets turned off, the boys go to bed, and i'm ready to perform a vasectomy on my husband with some toenail clippers.

I collapse into bed, but I can't sleep.  It was one of those frustrating nights when you start to think about anything and everything.  You know, things from like 15 years ago, things from yesterday, things that haven't even happened yet.  I was still wide awake at almost 3 am.  My autoimmune disease was flaring and sometimes I have trouble regulating my temperature.  Despite cranking up the heater so our house felt like an Easy Bake Oven, I was still freezing cold.  So, I decided to take a bath.  At 3 am.

There I was in the tub, with legs so mottled from the cold, that they resembled something like the purple people eater.   As the hot water began to warm up my body, I finally began to relax.  I filled up the tub and then turned off the water.  All of a sudden my serene moment was replaced with blood curdling screams.  Peanut had woken up (no, he's still not sleeping through the night) and he was running up and down the hallway screaming for me.   My hubby was still sound asleep.  I'm convinced he takes horse tranquilizers before he goes to sleep.  Who the f#@k can sleep through that shit?  My husband. That's who. Irritated as hell, I climbed out of the warm tub.  My poor legs began to turn back into purple people eaters and I managed to get Peanut back into bed and turned on some Spongebob.  I climb back into the tub and the water was luke warm. I wouldn't of expected anything else.

When all was said and done I think I maybe got 4 hours of sleep.  This morning I was so tired that I accidentally dumped the coffee grinds into my coffee mug instead of the machine and I don't even think I noticed until I was half way done drinking it.

Posted by Peanutlayne at 1:06 PM