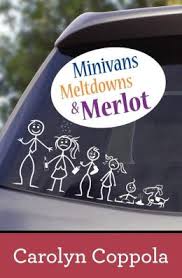 Carolyn Coppola had me at hello. Okay, so it wasn't hello, but she definitely had me at Minivans, Meltdowns, & Merlot, which is the title of her book.  I don't think it's possible to pick a better book title.  Even my husband laughed when it saw it sitting on my desk, and it's hard to make that man laugh.

As a mom of five kids ranging in age from teenagers to toddlers, this book felt like the autobiography of my life! I could relate to so many stories that I was literally sitting in my minivan reading the book while my daughter had soccer practice and snort laughing.

I loved every single chapter and that's rare when I read a book.  I definitely had my favorite chapters.  I loved all of the stories about her good friend, Chrissy.  I'm convinced that Chrissy and I are cloned twins separated at birth! The chapter titled, Pancakes aren't just for breakfast is a classic example.  Without giving too much away, Chrissy believes that her son had an accident in the tunnels of the maze at Chuck E Cheese (Are there any parents out there who actually enjoy that place?)  Chrissy climbs into the tunnels in an attempt to track down her son with the leaky, poopy diaper.  I wont give the rest away, but it's absolutely hysterical.  Another favorite Chrissy moment of mine was when she walked into Heavenly Donuts with a pair of underwear stuck to the outside of her coat by a static cling sheet.  If you read my blog then you know that I once made it through an entire Winco shopping trip with a red washcloth stuck to my butt and could not figure out why people were staring and laughing at me until I got home.  I'm telling you, Chrissy and I live parallel lives.

Uncensored had me in stitches. In this chapter her young child learns a bad word from his older siblings. We have this same issue, as I mentioned above that I also have teenagers and toddlers.  She describes an airplane ride from hell, in which she gets stuck sitting next to her little potty mouth and a stuffy, well dressed business man, while her husband chooses to sit with the older kids (i've totally been there).  I won't give away the magic phrase that comes out of her toddler's mouth, but I do believe I broke a rib from laughing so hard.

Fancy pants was another favorite chapter of mine.  As a mom to a child with Sensory Processing Disorder, I could totally relate to her son refusing to wear a pair of pants because they had some orange trim on the inside, thus making them too fancy to wear to school.

I could go on and on listing my favorite chapters, but then i'd be giving the whole book away. So instead, i'm just going to tell you to buy this book because you won't be disappointed.  Well okay, you will be disappointed when you reach the end of the book and then you're forced to actually start watching your daughter's soccer practices.