After two days of what can only be explained as pure holiday family hell, we finally got our Christmas tree up. 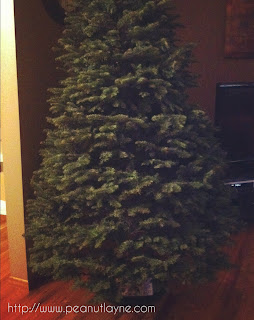 You might be wondering why it's not decorated.  Well sit back and let me tell you.  Because it wouldn't be Christmas in the Peanut household without a little blood, sweat, and tears (and cussing).

We were supposed to get our Christmas tree on Tuesday.  However, my husband came home from work acting more like Bill Murray from Scrooged, rather than his usual bubbly, sunshiney self (insert sarcasm here if you must).  My 13 year old daughter suddenly decided to act like Satan, and it was just one of those really crappified days where nothing goes as planned. The hubby ended up resigning himself to the bedroom, the kids went to bed, and I raided the pantry (damn Depo shot that makes me stuff my face like the little piggy that could).

So yesterday was a new day and we were hell bent on getting that stupid tree.  The hubby and I left the house after dinner and headed a few miles down the road towards the store.  We buy a real tree, but we aren't hardcore or anything and don't go trekking out into the woods to find our tree like the Griswold's.  Our family out in the wilderness equals a very BAD idea.  We'd be that family that got lost and ended up trapped in our minivan for 7 days surviving on leftover french fries under the seat.  See there is a benefit to never cleaning out your car!

Anyways, we arrived at Fred Meyer. You Pacific North-Westerner's know what I'm talking about. As for the rest of you? You don't have a Freddy's so does it really matter?  Anyways, we walked up and down aisles and aisles of trees.  There was a gigantic looking spider hanging from a web that almost made my hubby cancel the whole damn thing, but luckily after some deep cleansing breaths, he survived.  I've mentioned before that my hubby is picky. PICKY! So he made me hold up every flipping tree up as he examined it from all angles.  When we finally found the tree he asked me to hold it while he ran inside to pay for it.   So i'm standing there holding up this sappy tree, when a few men came up to me and were asking me questions in a heavy accent that I didn't understand at all.  I felt like a horrible bitch but I kept saying, "What? I'm sorry I don't understand."  One man had out his camera and I swear he was saying something about taking my picture. I'm not sure if it was me or the tree he wanted.  Maybe some men are heavily into tree porn?  At any rate I shook my head no and eventually they left.

We managed to get the tree home without any problems.  We naively thought that everything was finally slipping into place.  That is until we tried to put the tree into the tree stand.   The tree stand was plastic (and a giant piece of shit) and apparently the bolts had stripped away which really pissed off the hubby considering we had just bought it last year so it was literally used once.   I held that damn tree up for over an hour while the hubby was underneath the tree, cussing and bitching.  Let me tell you holding up a tree isn't fun.  I had sap in my eye and I'm pretty sure that a baby spider made a nest on top of my head.   After 90+ minutes of fun, our tree looked more like the Leaning Tower of Pisa.  I made the fatal error of saying, "Look babe.  This tree stand calls itself the two minute tree stand". Which in my defense it really did.  On the sticker label it read, "The two minute Christmas tree stand."  Shortly after my comment, the hubby made some kind of animalistic, primal scream and I knew he had reached his breaking point.  The tree had won, and by this point it was almost 10 pm so the kids had all passed out on the couch.

He grabbed the tree stand and his coat and without a word he headed out the door.  He was gone for almost an hour.  I knew he was taking that tree stand back to Fred Meyer as that's where we bought it last year.   I watched the clock and crossed my fingers that he didn't get arrested at Freddy's for having a post tree-standing mental breakdown at the customer service desk, but lo and behold he returned with a new tree stand in his arms.  The same brand of tree stand, but never the less a new tree stand.   So, we went through the whole process again and stood the tree up.  It actually looked straight for once and we both got a little excited.  The hubby's whole demeanor started to change and I could feel the old hubby coming back to me.  All of a sudden there was a loud POP!  I heard the hubby scream, "NOOOOOOO".  The damn thing had stripped again!  My immediate thought was, "Mother of GOD we are just not going to have a tree this year and I'm going to have to draw one on the walls."   Luckily, even with a stripped nail, the tree is still standing and despite it being a tad crooked, it's going to have to work.   Tonight we are going to attempt to decorate the tree.  I'm holding my breath and anticipating some type of tragic hook accident with blood spurting out of one of the children's noses, and a $250 co-pay to the ER.