Why vegan cheese is not for me 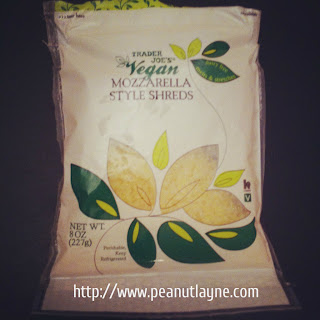 I know I haven't blogged in a while. I've been recovering from Christmas, being in a ham induced coma (I have NO self control when it comes to pork products), and dealing with unruly children who really need to go back to school before mommy flips her lid.

Anyways, I've had some health issues lately that i've been neglecting.  I'm allergic to gliadin (a protein found in gluten).  I'm not supposed to eat it, but i'm lazy and I love crappy food.  Carbs, sweets, and McDonald's make me happy.  I'm not going to lie.  But in giving into my cravings, i've also been making myself sick.  My kids have a lot of the same issues. My hubby really shouldn't be eating gluten or dairy either, but that's like trying to tell a gorilla he can't eat bananas anymore.

I've been researching my little heart out about what it takes to go on a gluten and dairy free diet and what i've found is depressing.  I can't really eat fast food anymore. BOO. I have had to completely substitute stuff in my homemade mochas and grabbing a mocha at my beloved Dutch Bros isn't really possible anymore. Double boo poo poo.

Last night my hubby wanted pizza.  The kids and I have been gluten free before but never gluten free and dairy free.  I went to Trader Joe's and Winco and managed not to flip anyone off so i'd say I handled myself pretty well. Perhaps this new diet is starting to change my moods for the better….errr or not.  I did mutter the B word under my breath to someone who nearly ran me over at the cross walk on the way into Winco.

So after nearly dropping $1,000 on gluten free and dairy free food (okay I didn't really spend that much but good gravy this stuff isn't cheap!), I finally made it home.  By this point I was starving as we were out of all the good gluten free snack food at home so I think all I had eaten so far was a handful of dry Chex mix.  I started to make my GFCF (gluten free casein free) pizza on Udi's crusts which are gluten & dairy free and outrageously expensive and kind of resemble cardboard.   I slathered my fresh mushroom marinara sauce on the crusts and then I opened the Trader Joe's Vegan Mozzarella Style Shreds, which is supposed to be a non dairy substitute for cheese.  Oh the cheese.  Where do I start?  The smell of the "cheese" when I opened the bag nearly knocked me out.  My hubby said it smelled worse than a McDonald's Playland on a hot summer day.  Yes, the aroma of butt crack and feet.  Not a good combo.  I took a little bite and quickly washed it down with Diet Coke (yes, I realize Diet Coke isn't healthy but baby steps here people).  I was really hoping that it was miraculously somehow going to taste like real cheese and not rotten assholes after it melted.

Meanwhile my hubby headed out to Pizza Hut to buy himself and the older kids real pizza while I was left to cook the GFCF pizzas for myself and the younger kids.  When the timer beeped I anxiously pulled out my pizzas and gagged.  They smelled horrific.  And they looked even worse than they smelled.  I didn't get a picture because I was too busy vomiting (yes vomiting) in the kitchen sink.  I was literally gagging, choking and crying in the kitchen.  My expensive pizzas looked like a crime scene.  The cheese had morphed into this slimy, goopy, runny mess.  I know I could describe it better but my gag reflex is actually going off right now while i'm typing.  If you picked up a piece of pizza the cheese just dripped and oozed right off and not in a good way.  Like a freaky science experiment gone bad kind of way.  I took a tiny bite and immediately spit it out and I was back at the sink puking.

Then I got pissed!  My expensive dinner was a pile of diarrhea.  What was I going to feed the boys? I started to panic.  So I grabbed a giant pizza cutter and picked up the pizzas one by one and literally just scooped everything off the crusts.  The cheese just ran right off the pizza like water.  What was left on the tray will forever haunt my dreams and give me nightmares.  Seriously.  Luckily I had some pizza sauce left so I spread new sauce on the Udi's crusts and added real cheese (yes, i'm a bad girl but after what I went through I didn't care at this point).  I cooked the pizza and the boys loved it, however, I could still taste the "vegan cheese" remains that had oozed into the crust.  So I sat down on the couch with a slice of Pizza Hut pizza on my plate.  I gave my hubby the look and said, "Yes, I know i'm not supposed to eat this, but I really don't give a shit right now".  I was trembling and shaking.  He just shrugged and said, "Okay, whatever."  However, I wasn't okay. It was the straw that broke the emotionally unstable camel's back.  I started picturing that runny, disgusting cheese snot and I dropped my plate and ran into my bedroom and threw myself on my bed and sobbed like the world was over, like Diet Coke didn't exist anymore, like Dutch Bros was bankrupt, like donuts were suddenly prescription only and you had to meet a $1300 deductible before you could buy one.  Yeah, kinda like that.

My hubby ran into the bedroom to see what was wrong and just stood there kind of stunned.  He waited a minute and then was like, "Really babe? Over some cheese? I really hope you blog about this, because this is freaking hilarious.  You really need to get a grip."

After I stopped sobbing and doing the Nancy Kerrigan, "WHYEEEE me?" routine, I managed to eat my Pizza Hut pizza (yes, covered in gluten, dairy and pure deliciousness) and then I started to see a little bit of humor in the situation.  That said, Trader Joe's is still getting an earful from me.  Oh yes, they are!