Somebody Call 911 momma's about to kick this sea hag in the taco…whao! Opposite of a Soccer Mom Week 3

Let's see, where do I even begin?  This week was the dreaded snack week.  I've heard horror stories about snack week.  Everybody Loves Raymond even did an entire episode where Deborah gets lectured by some uptight soccer dad for bringing an unhealthy snack (it was a bag of pretzels I believe and a completely hilarious episode if you haven't seen it).  Raymond sneaks in a healthy snack at the next game to try and redeem themselves, without telling Deborah.  I could totally see my hubby trying to do something like this!


I should also mention that this is the first week that my husband and I actually sat through an entire game together.  These past 2 weeks, he's been going to watch my younger daughter play, and i've been going to my 13 year old's games.   So far their games have been inconveniently scheduled at the same time, but this week they were back to back so that meant double the fun!  You're not really buying that i'm enjoying this are you?

Anyways, we showed up to my 7 year old's game with our $20 some dollar snack tucked into a Trader Joe's bag.  It was a nice cover, considering it was really purchased at Winco, but we were trying to make a good impression.   As we found a spot to unfold our mother f@$king fold out chairs, my hubby and I began to bicker with each other.  He gets way too involved in these things and I should mention has turned into quite the uptight soccer dad himself (I really should dedicate one week to him).  He was griping with me about taking too long to unfold my chair, almost spilling my coffee, being too noisy, blah, blah, blah.  Here's the problem, he actually cares what these people think about us, whereas I honestly don't care.  Anyways right before we plopped down into our chairs he turns to me and says, "Make sure you blog about yourself in your next post because you're the worst one here".  Gee thanks honey!   As I sat down in my chair I carefully placed my mocha in the cup holder, covered myself up with my coat to keep warm, and dug my iphone out of my purse to get ready to catch up on Twitter when my hubby says, "The sun is in my eyes.  Let's move down the field".  Really?  So, up we go, re-packing up the mother f#$king fold out chairs, grabbing our gear and shuffling down the field in search of the perfect spot…grumble, grumble.

Apparently it's not acceptable to sit next to the opposing team member's families.  We were immediately greeted with snarly looks and grumbles as we butted our way into the line of obnoxious fold out chairs. Sitting to my right was an old grandma that I will refer to as "Sea Hag".   I will discuss more about her in a minute as she is the highlight (or train wreck) of this week's game.

I have to admit watching a bunch of 7-8 year old girls trying to play soccer is actually quite entertaining.  I mean good grief, it's like watching the Hunger Games except the contestants are are a bunch of blindfolded chimpanzees trying to fight for the last banana!  I even found myself giggling a couple of times as these little girls stumbled around the field like a bunch of college kids on a bender.   Some of them went the wrong direction on the field, some of them just stood there looking lost, some were twirling their hair (my daughter) or reciting their own version of Sean Kingston's "Somebody call 911. Shawty fire burning on the dance floor" in the middle of the field (yes my daughter again).  Oh and those flyaway balls!  Seriously, I almost got hit in the face more times than I can count! There were more balls flying through the air than a gay club on foam night!  By the way if you've never been to a gay club on foam night, you really must go! It's so much fun!

As i'm secretly beginning to enjoy this weeks soccer game and I have even set down the golden iphone (GASP), enter the Sea Hag!  I knew it was all too good to be true that I might actually make it through an entire game without drama.  Sea Hag was your typical snooty, well dressed grandma, who appeared to be fairly well off.  There she sat proudly displaying her adopted grandkids and talking non stop about what brilliant soccer players they were.  Honestly I don't know what ethnicity these kids were and it seriously doesn't matter one bit except for I found myself wanting to say, "Well no sh#t lady, they are blessed to not be blood related to you and your douchenozzle husband!"  Anyways, I was rolling my eyes and trying to drown out the Sea Hag when all of a sudden she made things personal.  Oh boy did she ever! The ball rolled right up to my daughter, and I should mention that my daughter has an anxiety disorder known as Selective Mutism so this is the first year she's been able to participate in sports because of her anxiety.  We are super proud that she will even go out onto the field, and seriously she's 7 and this is her first year playing soccer.  Who really gives a crap?  Well Sea Hag apparently does because she proceeded to yell out at the top of her lungs, "Oh my God!! What is number 26 doing?  Look at her just standing there!  WHAT ARE YOU DOING NUMBER 26?"  My momma bear instincts kicked in and I gave her the "You talk about my daughter again, i'm going to kick you in the taco" look.  My husband knowing exactly what's about to go down as i'm hardly the silent type quickly nudged me and said, "Babe DON'T".  Damnit, why did he have to come with me this week?

I'm sitting there silently plotting my revenge when Sea Hag loudly announces, "Sadie is done playing.  We can leave now.  There is nothing worth watching here".   The game wasn't even over but apparently her precious granddaughter was done for the game and that meant it was time for them to go.  Good riddance!  I continued to give them the stink eye while they packed up their crap.   As the game neared the final quarter my hubby announces (in a much too excited tone I might add), "I need to go get ready for snack".  To which I replied, "Babe, there is still like 15 minutes left".   "Yeah, but I need to get prepared" J answers.   I rolled my eyes and told him to go for it.  I mean it's granola bars, Gogurts, and dysfunctional juice boxes for Pete's sake!  What is there to prepare?

The game ended, we lost by one stinking goal, and I rolled my eyes at all the parents on the opposing team who were saying things like, "Losers", "Haha we beat them", "Our kids are the best".  Seriously?  These kids are freaking 7!!!! Apparently douchenozzleness is contagious in these parts!

They got up to do the tunnel.  No, I did not participate, but I did manage to snap a pic!


(Check out McSexy in his fold out chair! It was so hard to keep my hands off!) 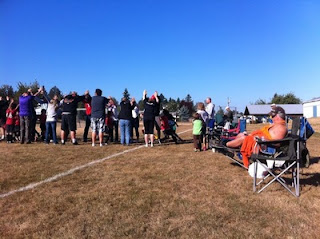 My daughter watching her big sister's game.  I like to call this her Flavor Flav!
Have I mentioned my kids are awesome?! 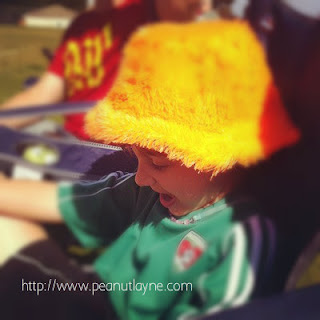 In case you missed it, here's week one of my series:
http://www.peanutlayne.com/2012/09/whats-opposite-of-soccer-mom-me.html

Posted by Peanutlayne at 3:00 PM