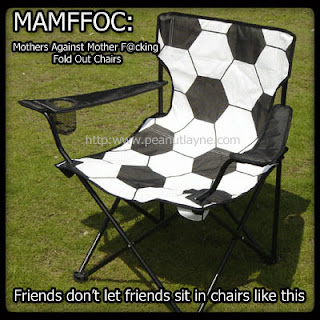 Picture this: I'm lying in my warm, comfy bed. I'm finally sleeping after having a nearly restless night with a two year old who doesn't understand that he's a human and not a hamster so this nocturnal crap is getting really old, when i'm woken up by a horrific sound, "Babe, get up. It's time for the soccer game".   Noooooo, not soccer! Anything but soccer!  Why couldn't I have woken up with explosive diarrhea, a rapidly spreading fungal skin rash, or heck, even the clap would do!

Still completely half asleep and feeling like I got drugged with a ruffie the night before, I dropped my 13 year old off at the field so she could warm up and I drove to a nearby coffee stand to get a mocha. I seriously want to punch the people in the face who schedule these games at the butt crack of dawn.  Hello, it's Saturday people! I just want to sleep! I don't want to trek through soaking wet grass that hasn't dried yet and sit in the freezing morning air and most of all put on a bra before 2 pm on the weekend!  While at the coffee stand I briefly considered begging the barista to add a shot a vodka in my mocha but since some people don't have a sense of humor, I restrained myself. However, now i'm mulling over the idea of opening up an alcoholic beverage-coffee stand.  I think it would get a ton of business and can you imagine the tips you would get?!  Hey, they make a chain of bikini coffee stands for perverted men who apparently aren't capable of ordering a coffee without needing to look at young girls wearing skimpy bikinis with their tits hanging out, but yet we moms get nothing?  Where's my "organized sports suck, i'm exhausted, overworked and underpaid, PMSing and bloated like a Macy's Thanksgiving Day parade float, my husband woke up on the wrong side of the bed today and is being a total butthole but spousal homicide is seriously frowned upon in our society, my teenagers are working really hard to shave some years off my life, my toddler is a nocturnal hamster who doesn't sleep, my 4.5 y/o just graffitied every room in our house with crayons, and what I really need is a shot of vodka instead of espresso, or a margarita on the rocks in a coffee cup and please hold the straw because I plan on slamming that drink" stand?!   And please i'm just kidding here people. I realize drinking and driving is wrong so forget the drive thru coffee stand! I'll deliver!

So, we pull up to the high school and what do my eyes see?  A freaking camper trailer parked on the open grassy field.  In front of the trailer is an entire family of mother f@cking fold out chairs (with soccer ball print on the fabric I might add), lined up in a row in front of the camper.  What's even more heinous is the chairs were arranged from biggest to smallest, as in Goldilocks and the 3 Dumbasses.  Wow.  I could not believe my eyes.  I tried to take a picture of the crime scene so I could share it with my fabulous followers but my husband (AKA spoiler of all things fun in this world) grabbed my iphone out of my hands and said, "Babe, our kids go to school with these people and you want to put a picture of them on your blog. Are you crazy?"  Is he kidding?  These douchenozzles load up their camper trailer to drive to a game that's probably no further than 5 miles away from their house and i'm the crazy one?  I think not!

I made my way down to the field, and rolled my eyes at the sea of nauseating fold out chairs and wouldn't you know that the one and only open spot on the entire sideline was conveniently located next to the canopy dad.  Perfect.  I fumbled with my mother f@cking folding chair and may have even kicked it a couple of times.  It's not very easy to unfold a chair while holding a steaming hot mocha in one hand.  I plop down into my chair,  pick up my mocha to take a drink when I hear, "GOOOOO GREEN.  GET DOWN THE FIELD" blasting in my ear canal.  Shit, nothing like spilling some hot coffee down your shirt. Thanks canopy dad for scaring the holy bejeezus out of me.  However, I did thoroughly enjoy when just a few moments later his daughter turned around and said, "Shhhhhh.  Shut up and watch the game dad".   Unfortunately that didn't stop canopy dad from screaming, but i'm not sure there is anything that could shut this man up other than perhaps some industrial strength duct tape…..hmmmmm.

So i'm zoning out in my chair, freezing my butt off, with soaking wet feet, thinking, "Well, there's not going to be much to write about today", when suddenly the "muscle car dad" suddenly enters the picture.  Ewwww. He immediately strikes up a fascinating conversation with canopy dad about his lengthy career in the tire business, and shared some infinite wisdom such as, "Yeah did you know if you steal, you get fired over there? They are hardcore man. They will straight up fire your ass for stealing. It's bullshit"  Wow, say it isn't so? A job that actually fires people because they steal? What a bunch of insensitive a@@holes!   The best part of the conversation though was when muscle car dad started bashing on his wife about how she doesn't let him buy anything to fix up his old cars anymore.  Gee, I wonder why?  Perhaps because she is tired of supporting your underemployed, pot bellied, your Joe Boxers are sticking out of your shorts and you don't even notice, a@@!!!!  I also got to hear an entire conversation about the ins and out of trannies, but unfortunately they weren't talking about the good kind of trannies….sigh.  If they had been talking about high heels, wigs, and all things fabulous, I just might have actually branched out and joined in a conversation.

In case you missed the first post in my anti soccer mom series here it is:
http://www.peanutlayne.com/2012/09/whats-opposite-of-soccer-mom-me.html