Yesterday J and I headed to the annual Bite of Oregon located on the waterfront in Portland. This was our 3rd year attending the Bite and it's something we look forward to every single year. Basically it's just a ginormous food festival where you stuff yourself silly on a ton of "bomb ass food" as my hubby likes to say.

To prepare myself for the event I carefully selected my stretchiest "fat pants". For those of you who grew up watching Friends remember Joey's turkey pants? If you didnt catch it (maybe you lived under a rock or something), he wore maternity pants to Thanksgiving dinner as he attempted to eat an entire turkey, LMAO. I briefly debated about pulling out my old maternity pants but those are sitting out in a dusty box in the garage probably full of spider eggs and dust mites so I opted for my spandex capri leggings instead. Thank goodness the 80's are back in style and it's okay to wear leggings again (or is it?)

The first challenge was getting out of the house. With 5 kids this is a huge pain in the ass! The second pain in the ass (ooops I meant challenge) is my husband. He takes forever to get ready which just kills me considering he is freaking bald and has absolutely no hair! Wth? How can you be vain and bald? Shaking my head. Anyways he took his sweet ass time in the bathroom getting ready and then started bitching at me about hurrying up because we had to leave. Yeah I get 5 min, he gets 90. Grrrrr, where's that pee pee covered towel when I need it? *Please read my post titled "Reusable Toilet Paper" if you haven't already. Otherwise this makes me sound completely deranged, lol!

So we say goodbye to the kids, yell at the teens that we're doing a full head count when we get home and all the children better be accounted for, and head out.  Free at last!!! Woohoo!!! J ended up taking the wrong exit and we drove around in circles for a while. I yawned and rolled my eyes while he complained about going the wrong way and that we were losing valuable food eating time. Men are such whiners, lol! We finally found a parking spot, and as we're walking towards the entrance there were two nerdy, stuffy looking men who had what looked to be flyers in their hands but they didn't appear to be giving them out to anyone. I had this feeling I was going to be the next victim.  Sure enough we walk by and one of them steps forward and hands me something. I glanced at it and lo and behold it was a CD titled "You have a friend in Jesus".  Awesome, lol! I'm not sure why I was personally selected to receive this awkwardly radical gift but for whatever reason they must've thought that I needed saved. Good intuition! Lol!!!!  *I gave it to my almost 13 y/o daughter when we got home. She could use a friend in Jesus.


Here's a pic of my awesome souvenir: 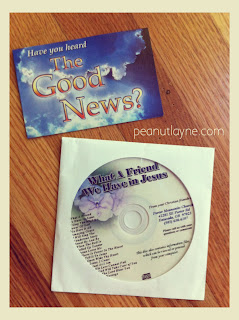 We walked in and immediately started stuffing our faces. We ate crab cakes, fried alligator (tasted like chicken), chocolate covered strawberries, currywurst, pulled pork sandwiches, cupcakes, elephant ears, yakisoba noodles, kobe sliders and I dont even remember what else. Seriously this place is just ridiculous! It's a food lovers paradise. 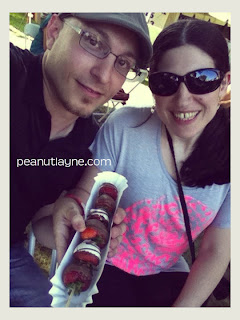 We decided to sit down and people watch for a bit. People watching is so much fun in Portland. It's a never ending slew of dweebs, geeks and weirdos (hey I had a board game with the same name). We decided to sit next to the beer garden. Drunk people=prime people watching location. We immediately notice an awkward looking threesome. Two unattractive, overly tan, oompa loompa-ish, cougars who were already drunkety drunk drunk. One of the ladies was so drunk that she fell off her stool and knocked over a light post. Classic! She was getting very close to the dufussy looking guy they were with (they really picked a winner let me tell you). She was doing the hair flip and getting closer and closer to Mr. Dufus. The other woman was the obvious 3rd wheel. She kept looking around and trying not to let it be known that she was obviously uncomfortable with being the 3rd wheel (I don't blame her. Nobody likes to be the 3rd wheel). I don't know what happened (perhaps her 5th glass of wine kicked in), but all of a sudden the 3rd wheel jumped off her stool and walks up to this young, 25ish looking guy sitting right in front of us. However we were pretty sure he was gay. J immediately whispers in my ear "Doesn't she realize he's gay?" I whisper back "Babe this bitch is old. Her generation isn't blessed with gaydar skills". We watched with horror and fascination as she continued to embarrass herself. Total train wreck! J got up to throw something away and he missed the very best part. The dude's boyfriend comes up and tells this woman to "Get out of my seat NOW", lol!!! He was MAD which I find comical because A)your boyfriend is gay B)this lady was scary looking and older than dirt so in my mind I'm thinking "Dude just let the woman work it for a minute" but the jealous boyfriend just wasn't having it. The whole thing was so funny I couldn't stop giggling. I actually felt a little bad for the 3rd wheel, but I have no doubt that she found someone to go home with. She was a very determined cougar and I dig that!

The other highlight of the night was the dancing Superman. Enter mentally unstable man dancing his heart out and doing the air guitar. Never mind the fact that the band was playing a super slow song. This man didn't care and was totally rocking out. I double dig it.

On one of our last stops of the night we're standing at the elephant ear booth and there's an older mom with her grown son. He was a little heavy set and wearing a cartoon t-shirt and just screamed momma's boy. J leans over and said "Wow babe. That's totally you and M someday".  In case you didn't know, M is the biggest momma's boy you've ever seen!  I have no doubt he'll probably live in our basement until he's 40 and that's perfectly ok with me. Building a basement will definitely be going on J's to-do list someday. Not even 5 min later our oldest daughter called and said M was crying for me and wanted to talk to me, lol!  Through hysterical sobs on the phone he said, "Momma (insert cries here), you are never ever going anywhere again".  Yep, total momma's boy.

We grabbed some sugary caramel corn to bring back to the kids and trekked back to the car.  Our tummies hung over our pants and we kept saying we were going to barf from all the food.  Oh and J got checked out by a tranny wearing a hot pink evening gown.  Have I mentioned how much I love this city?!

Email ThisBlogThis!Share to TwitterShare to FacebookShare to Pinterest
Labels: I crack myself up, life on the layne