Cheerios and a broom

I've had a rough couple of days, knee deep in the pits of mommy hell.  No, my dog didn't die, and my relatives are still alive and kickin (and still crazy), but just the typical, ordinary things that make me want to have an emotional breakdown.  Oh wait, I did!

Let me back up to last night.  Yesterday I had a really bad IC day.  I've posted before about my struggle with Interstitial Cystitis.  I was in a tremendous amount of pain all day long and nothing was helping me feel better.  I tried my usual tricks to try to relieve the pain (hot baths, ice pack on my privates, lots of Advil, etc), but nothing was working.  My husband bought me a jumbo sized box of Junior Mints to try and cheer me up as he knows they are my absolute favorite.  I opened them up after dinner, ate a couple of them and then even handed my boys a few which is pretty damn nice of me considering I don't like to share my Junior Mints with anyone!

I put the boys to bed and as soon as their eyes were shut and their bodies stopped twitching, I snuck out of bed like a mommy ninja.  I eagerly opened up my top dresser drawer (underwear drawer), and reached for the box with excitement and anticipation only to discover that the box was totally and completely, freaking empty! WTH?!  My dear, sweet, little momma's boys had snuck into my secret, hiding spot and ate every single Junior Mint. Yes, every last one of them.

I don't know if it was the massive pain I had been feeling, the stress of a chaotic weekend, or what it was, but all of a sudden I began to cry.  Not just any ordinary cry, but deep, wretched sobs, as if Junior Mints had made an announcement that they were going out of business and would no longer be sold. I sobbed so loud that my husband actually felt sorry for me (i'm sure I must've been a pretty pitiful sight, lying on my bed and clutching an empty mint box for dear life).   He got into the car at 9 pm and drove to the store and bought me a brand new jumbo sized box of mints.  It was so sweet of him that I broke out into even more sobs when he returned.

I woke up this morning hoping that today would be a better day.  I mean it can't get much worse than finding out your sweet little momma's boys ultimately betrayed you, right?  Yeah not so fast momma!

Shortly after my dear hubby left for work, this is what I walked into: 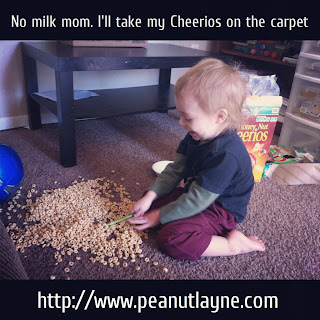 In just the short time it took me to upload this photo onto the computer, my two boys apparently decided that it would be more fun to toss the Cheerios all around the room.  I have never seen so many Cheerios in my entire life!  They were EVERYWHERE!  I was too distraught to take a picture, but they were under the couch, under the table, on the table, on the couch, under the bookshelf, etc. It was a Cheerio explosion.

I'm vacuuming like a maniac when all of a sudden my foot really starts to hurt.  I'm a little embarrassed to admit this, but considering I just admitted that I sobbed over an empty mint box, I guess this pales in comparison.  Early this morning I pretended I was a world famous ballerina.  I was dancing around on our hard wood floors and leaping into the air like I was auditioning for the Nutcracker.  When you are so out of shape that the only exercise you've gotten in the last few months is walking to the mailbox, it's probably best that you leave the dancing to the professionals. I tore a bunch of important stuff in my foot.  I don't know what I tore, but holy cow my foot hurts A LOT! This is also the same foot that I broke my toe on just a few weeks ago.  A toe that refuses to heal because a certain toddler who will remain nameless, likes to jump on it with shoes on.

So, i'm limping around the playroom, vacuuming never ending mounds of Cheerios all over the floor with a gimpy foot, when the vacuum suddenly shuts off.  I thought that maybe the boys unplugged it, but nope, it was still plugged in.  I twisted the container off and it took it to the garbage can to empty it out.  Dust, hair, and several months worth of nasty funk flew all over the kitchen, as well as all over my shirt.  F@ck my life.  I managed to clean up that mess, when Peanut had gone back into the playroom and emptied out all the games and DVD's off the shelf.  I was not amused by this point.

I re-plugged the vacuum into another outlet and the damn thing STILL wouldn't turn on.  The vacuum was dead.  By this point I had one option.  I moved the couch into a different spot to cover up some of the Cheerios but there still quite a few scattered all over the carpet.  I grabbed a broom and started sweeping Cheerios off of the carpet, which isn't easy.  My gimpy foot was throbbing, Peanut had moved on to another room of the house to destroy and I started to really hate my dear sweet hubby for getting an escape from this house of horrors.

As I began to type this, Peanut came running over to me and said, "Mommy Mawney stuck".  Mawney is not his name, but that's what he calls him because he has a very unique and difficult name to pronounce.

So, I head outside and this is what I see: 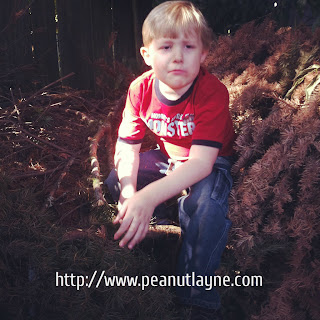 My kid with his foot stuck in a pile of chopped down tree branches.  And no I didn't tell him to make this face. He did that completely on his own because he's awesome and hilarious and takes after yours truly.  Don't worry mommy saved the day!  I pulled his foot out of the branches and it didn't even require any special tools or emergency calls to the fire department.  Perhaps my day is slowly turning around for the better!

Posted by Peanutlayne at 2:15 PM