In case you've missed it, i've posted before about my hubby's extreme fear of spiders.   You can find it here.  It's actually pretty funny. http://www.peanutlayne.com/2010/02/j-will-kill-me-but.html

My husband really does have arachnophobia, which is a phobia of spiders.   I know a lot of people claim they have it and say "Oh yeah, i'm afraid of spiders", but arachnophobia is so much more serious than just being a little creeped out whenever you see an eight legged creature.  For example, when J encounters a spider, or even just a spider web, his reaction is so severe that I worry he may actually keel over and die one of these days.  I'm talking full blown panic attack.  He can't speak.  He can't move.  He forgets how to breathe normally.  He completely, totally and utterly shuts down.  It's pretty bad folks.  If my life were in danger and J had to step over a spider to save my life, i'd be screwed.  No joke.  Me on the other hand?  I actually used to collect spiders as a child and place them in a mason jar and call them my pets.  Yeah, I was a weird, strange, little girl!  Explains a lot about me, doesn't it?

As if all of this isn't funny enough, his extreme arachnophobia leads to other bizarre spider related behavior. He is known to fill up numerous spray bottles of essential lemon oil (he read online somewhere that spiders don't like it) and walk around the house like a mad man, spraying the entire parameter of our house with his homemade lemon concoction.  The smell from the 10,000 pounds of lemon oil that he uses (that stuff is hardcore too) is so freaking strong that you can hardly stand it. It's as if a lemon grove puked all over our house.  The smell just seeps in through the cracks and you walk around the house gagging on lemon fumes. I can only imagine what our poor neighbors must think!  If I had to guess they probably think we are trying to cover up the smell of rotting, dead corpses (they already think we're completely looney), but nope, it's only my whackadoodle of a hubby trying to keep the spiders away!  We use Pine Sol to cover up the body stench….TOTALLY kidding. The only stench that covers our house (aside from the lemon) is the smell of rotting diapers.

Anyways, now that you've lost your lunch with my diaper comment, late last night he had gone into the garage to look for something. He was apparently sorting through boxes trying to find some old football video thing (who knows, who cares).  J is a night owl and typically never goes to bed before 3 am so it's not usual for him to be puttering around the house in the middle of the night.  It was probably close to 2 am and I had passed out on the couch watching television.  The living room and the garage are not far from each other (they even share a wall).  I was resting peacefully on the couch when all of a sudden I was woken up by these horrendous, gut wrenching screams of horror.

Most normal people who were woken up in such a manner would probably go into panic mode thinking that their spouse was being attacked by an intruder, right?  I mean after all it was the middle of the night and he sounded like he was being attacked given the severity of the screams.  Nope.  I knew immediately what was going on.  "J must've seen a spider" I muttered to myself as I rolled my eyes and pried my tired body off of the couch.

I make my way into the garage and I see J standing on a weight bench and screaming like someone was pointing a gun to his head.  I quickly tried to reason with him.  "Babe, it's 2 am.  Do you REALLY want the neighbors to call the cops thinking one of us is being murdered?"  J proceeded to keep screaming.   By this point i'm getting irritated and confused.  I knew it had to be spider related considering there was no intruder in the garage that I could see, and he looked to be unharmed, as in no obvious sign of injury.   I was really thinking I was going to have to slap him across the face or pour some cold water over his head to snap him out of it, when all of a sudden I saw something scurry across the floor. 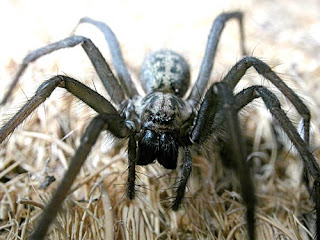 I leaped up onto the weight bench with J.  "OH MY GOD, it's going to eat us alive" I screamed. This did not help the situation, especially considering I am always the one who rescues J from the big bad spiders and kills them but there was no way in hell I was getting close enough to this furry bastard to kill it!  Can you imagine trying to step on one of these mother f@ckers?!  Seriously this thing was half as big as my foot!

By this point J was finally starting to put words together.

"I DON'T KNOW".  I screamed back.  Remember it was 2 am and I wasn't sure if I really saw a tarantula crawling in our garage, or if I was dreaming.

"It was WHAT?" I yelled back all annoyed that he was still speaking toddler language.

Both of us just stood there completely paralyzed with fear.   By this point every single kid was awake in the house.  We yelled at them to go back to their beds and stay there.  As for the spider?  He ran away for dear life which means he's still out there somewhere.  J was unable to sleep and spent the entire night Googling "mini tarantulas" and we're pretty sure we've narrowed it down to two species of spiders.  Our furry friend was either a Hobo spider or a Tegeneria Gigantea.  Both spiders are commonly found in the Pacific Northwest (lucky us).  The Hobo spider is definitely the scariest out of the two, for if you get bit by one of those, you're going to wish you were dead! The Tegeneria can bite through human skin, but the bites are rarely serious.


See what I mean?

However, that hasn't stopped my husband from going completely bat shit crazy on a mission to kill and destroy every single spider that dares to enter our house.  The following day he was up bright and early (not that he slept that night) and headed to Home Depot to purchase a fumigator for the garage.  Once again I tried to be the voice of reason with the man and remind him that those fumigators were toxic and that if we didn't die of cancer, we'd most likely grow a third nipple.  However, I lost this battle.  The garage was promptly fumigated and we still haven't found the body to our furry friend.  J is convinced that despite fumigating the garage, he's still out there, waiting and plotting his revenge.
Posted by Peanutlayne at 10:49 AM