Free Advertising (not really about advertising)

Co-sleeping. One of those terms that can create a lot of controversy, a lot of opinions and a lot of questions. However, i'm not really here to discuss the pros or cons of co-sleeping, as we've been doing this for so many years now that it's kind of like breathing to me. It works for us, but I know it's not for everyone, and that's okay! To each their own I like to say. I only have two little co-sleepers left at this point as the other kids have graduated to their own beds. Yes people, co-sleepers do eventually migrate to their own beds and no, we don't plan on co-sleeping until the kids are in college. Honestly, i'm enjoying the last couple of years that I have left with my boys. When they leave the bed, i'll be left with my husband, which knowing my luck will probably just lead to more future co-sleepers.

One of the questions that we sometimes get asked is "So, how do you guys have sex?" Me, being an eternal smart ass typically respond with something like, "Well we transmit sexual rays from across the room, using only our eyes" or something to that effect, but seriously, it's a valid question, and deserves a valid response. Although, really it's kind of a stupid question if you ask me. Obviously a bed isn't the only place a couple can have sex, or there would be a whole lot less people populating the earth. Without telling you exactly where we choose to have sex, you basically just pick a part of the house where no children are present, which can be challenging with five kids.  Sometimes you have to get a little creative. Use your imagination.

One night my husband and I were engaging in consensual adult sexual activity in one of the few precious kid-free areas of the house, when all of a sudden I heard a noise. As a mom, it's hard to not be in mommy mode, even during sex. For my husband, this is not an issue.  My husband J has no problem forgetting we are parents while having sex, and he also apparently becomes deaf during sexual activity because he is difficult to interrupt. "J, did you hear that?" I asked. No response. "J, I heard a noise". "It's nothing. Don't worry about it", he mumbled. A few seconds later I heard it again.  The husband still seemed completely oblivious. That is until a blonde haired almost five year old little boy suddenly appeared from around the corner. J leaped across the room like an olympic gold gymnast while I frantically searched the scene for my underwear, pajama pants, and my dignity. I couldn't find any of the above.  Desperate I grabbed the only nearby objects I could find which consisted of two small square shaped throw pillows. I placed one in front of my lady parts and the other one covered my behind. Honestly I needed a bigger throw pillow.  My husband just calmly put on his pants. I tried to take a step with my makeshift loin cover but it was difficult so I just kind of froze in the middle of the living room. I pretended I was one of those free standing sandwich board sign holders for a minute.  I was advertising how not to be a complete and total failure as a parent.  "Maybe my son wouldn't notice" I secretly hoped and prayed as I knew we couldn't afford therapy for a traumatized child who just walked in on his parents doing the nasty. 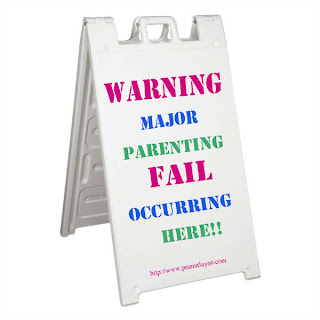 In the meantime our son had sat down at the dining room table and was waiting for breakfast, at 2 am in the morning. My husband and I looked at each other and giggled. We tried to talk to him, but got absolutely no response. It was as if the lights were on, but there was nobody home.  Our sweet little clueless son was sleep-walking. "Buddy, go back to bed" J told him, and as oddly as he entered the room, he stood up, walked back down the hall and crawled into bed.  Then my hubby looked at me and said, "We're in the clear. Now take off those throw pillows".
Posted by Peanutlayne at 10:47 AM