I will not scream for ice cream

Parenting is a dirty job. Disciplining your kids is an even dirtier job. Disciplining while driving and operating a vehicle is pure filth, and requires a gold medal of excellence because i'm convinced it's impossible.

Last night I picked up my 8 year old daughter from soccer practice.  Bo's has always been a challenge. I wont go into her background, but she is feisty and headstrong and the touchy feely, getting down to her eye level and calmly explaining stuff like, "We don't yell honey" does not work for her.  For some unknown reason she got it stuck in her head that I was going to buy her ice cream on the way home.  Considering it was 7 pm, we still had to drive across town to pick up her older sister from her practice, and no one had eaten dinner yet, this was never going to happen.  Try explaining that to my daughter.   She screamed and wailed at the top of her lungs, like a two year old.  I didn't have the option to pull over.  I had to get across town to pick up my other daughter.

I did what I like the call the stair steps to failure:

Step number one: I told her to stop.  Explained to her why she wasn't going to get ice cream. I rationalized. Explained we hadn't eaten dinner, blah, blah, blah.  Didn't work at all.

Step number two: I tried screaming at her to stop at the top of my lungs.  All that did was hurt my throat. Bad idea.

Step number three: I was so desperate that I started throwing out the empty threats.  Some of you moms know what i'm talking about here.  The, "If you don't stop screaming, i'm going to pull this car over and you're walking home."  Yeah, she knew I was full of bullshit on that one considering we live in a big city, it's dark, we were miles away from home, and well…it's illegal.  My kids are pretty smart.  They know the laws.

By the time I got home I had listened to her scream for about 15-20 minutes.  My nerves were completely shot, my head was pounding, and I was regretting ever having ovaries.   I gave my hubby a brief description of what had just occurred and he was pretty upset and went in and told her to write sentences. He told her to write, "I will not scream for ice cream" which I find pretty comical. It is sort of  funny, isn't it? 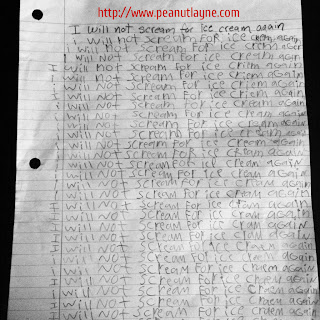 I was skeptical that his punishment was going to work, but at this point I just wanted to run into the bathroom, lock the door, and stay there until the kids turned 18.

A little while later my hubby called me into her bedroom and she was lying on her bed, sound asleep,  with a homemade card lying on her chest: 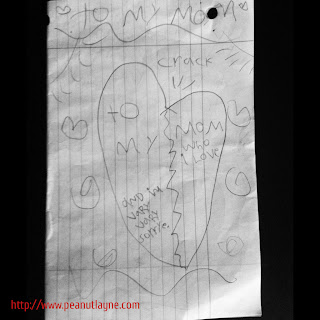 I'll admit, I cried and secretly thanked my hubby for being a genius.  And then I thanked my ovaries.

Posted by Peanutlayne at 9:13 AM