Who wants some hair in their salad with a side of butt crack?

On Saturday my 8 year old daughter had a birthday party to attend at a local pizza parlor.   My husband is overprotective (okay and so am I), and thought she was too young to simply drop off at the party, so I told him I would stay at the restaurant, but sit in a different section with the two boys so she could have some privacy.  My hubby had a photo job he had to leave for, so he stayed with me long enough to order food for me and the boys and then left.  I'll admit I was feeling a bit panicky when he left and was having flashbacks of my former single mom days when my teens were toddlers and I had no choice but to take them everywhere alone.  My hat is off to you single parents, as it is not an easy job!  The restaurant was packed to the brim and noisy as hell.  The entrance to the indoor playground was no where near where I was sitting and all of the tables with views to the playground were full, so that meant I had to try to keep the boys at the table with me until we were done eating, and then take them out to the playground….alone. Yikes!

This meant that I had to shovel food into my mouth as fast as humanly possible with one hand, while the other hand was extended out around my 2.5 year old's waist trying to keep him from escaping from the booth (he wont sit in highchairs anymore and just climbs right out).  I was almost done with my salad when all of a sudden I saw the one thing that you never ever want to see on your plate…a small, curly, black hair that was slightly pube-like in appearance and definitely NOT mine….BARF!   I immediately put the fork down and vowed to never eat from a salad bar again.  I was seriously repulsed to the thought of vomiting.  However, I suppose hair on the plate is an excellent method to keep you from overeating as I can honestly say that I lost my appetite for the rest of the weekend.

Since lunch time was definitely over at this point, I took the boys out to the playground.  It was indoors, but they had all of the windows wide open and considering it was only 50 degrees outside, the playground resembled an indoor igloo.   I had an entire hour to kill in the playground before my daughter's party was over, in the freezing cold playground, alone with no one to talk too (none of the other parents were inside the playground but me).   My boys are 4 and 2, but they cannot be trusted alone (if you haven't already gathered that by previous pics of their shenanigans).

My legs were hurting from standing, my nose was dripping from the cold, my head was pounding and I found myself obsessively checking my phone and praying for the time to pass. The chaos from all the wild, unsupervised kids was too much to bear at times, and the smell was just horrific. You would think with open windows that it wouldn't smell so bad, but when you have dozens of little kids running around with barefeet or socks, all you could smell was the aroma of rotten feet and cheese. I really can't explain the smell, nor do I want too.

Finally some other parents started coming in to check on their kids, but it was mostly dads checking on their kids.  As luck would have it, I had the distinct pleasure of standing behind a man with the largest, hairiest butt crack i've ever seen.  He stood in front of me for about 20-30 minutes and there really wasn't anywhere else for me to go as we were packed into this playground like sardines and I was trying to stand by the ball pit as that seemed to be Peanut's favorite place (and no, I don't even want to know what was inside of that ball pit).  I couldn't resist taking a pic of the butt crack man (and this was taken right after he pulled up his pants. Yep, it was much worse than this):

Did I really just instagram a man's hairy butt crack?
Oh yes, I did! 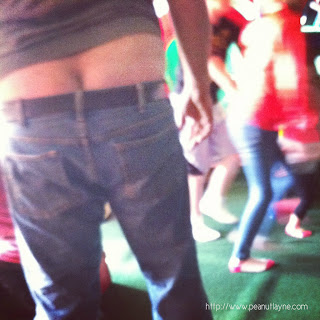 The next morning my almost 5 year old son woke up with a blazing case of pink eye. No doubt from one of the little darlings in the playground.  So how was your weekend?
Posted by Peanutlayne at 1:41 PM

Email ThisBlogThis!Share to TwitterShare to FacebookShare to Pinterest
Labels: children's birthday party, hair in my salad, hairy butt cracks, I crack myself up