What's the opposite of a hoarder? My husband!

I know, I know. Two husband bashing posts back to back, but freaking A the man makes it way too easy to pick on him!

My husband grew up in an extremely neat and tidy home.  My mother was similar, but didn't quite possess the same level of OCDness as his parents. We briefly lived with his mom for about a year shortly after we were married and let's just say I have never met anyone that organized in my entire life. We had labels on every item in the house.  I'm seriously surprised there wasn't a label for our toilet. Our pantry items were stacked up just like in the movie "Sleeping with the Enemy" with Julia Roberts when she comes home and finds her canned goods lined up in the cupboard and realizes her crazy ex-husband was in her home.  Yeah, just like that.  Our pantry was so ridiculously organized that my hubby and I would mess it up just for fun (I really hope my mother in law isn't reading this right now because she's probably breathing into a paper bag, lol).  Even my sister in law would join in when she would come to visit.  We would shuffle items around and turn labels backwards.  We stacked the corn and beans together (GASP) and put the peanut butter on a different shelf. These were all big no-no's.  I swear my mother in law had a little internal voice that would notify her when something had gone awry because she would make a beeline right for the pantry and the items would quickly be returned to their original location.

She also didn't like the way I loaded the dishwasher as i'm the type to just rinse off the dishes and wherever they land in the dishwasher is good enough for me. Sure I have to shuffle things around from time to time to make room, but I never realized that loading the dishwasher had an exact science to it.  To my mother in law, there was definitely a right and wrong way, and she even (nicely) said, "Why don't you just let me load the dishwasher from now on dear?"  Well, let's just say that some of these behaviors have spilled over onto my hubby, and again that's not necessarily a bad thing, just kind of irritating at times.

I like to say that my husband is the opposite of a hoarder, which again, not a bad thing. I mean you've all seen the show Hoarders right?  By far the scariest, most disturbing show on television. How people can sleep on top of a mattress soaked in cat urine and dog turds is beyond me….ick!  I get so anxious whenever I watch it, that a mere 5 minutes into the show i'm racing around my house like a madwoman cleaning (my hubby can't even watch the show).  If you ever need motivation to clean your house, turn on Hoarders and you will find yourself wanting to scrub every surface of your home.  His cleanliness and neatness isn't what bothers me (okay, he does cause some major eye rolling when he's frantically scrubbing the floors on his hands and knees and mumbling under his breath that none of us know how to clean properly). What really drives me bonkers is his frequent urge to purge.  His anti-hoarding ways have cost us a lot of money over the years.

My 15 y/o son was a Toy Story obsessed maniac.  He had tons of seriously awesome Toy Story merchandise from the first two movies. When we downsized homes in 2008, we didn't have Peanut yet. Our almost 5 y/o son was just a baby and our older kids had outgrown Toy Story.  Me, being the sentimental type didn't think it was a wise idea to get rid of the Toy Story stuff. Hello, it's a classic!  Well Mr. Urge to Purge insisted that it all needed to go, so he packed up several large boxes of toys (some vintage and collectible at this point) and dropped them off at the nearest Goodwill (no, he didn't even try to Ebay or Craigslist them).

Just one short year later, guess who became totally, 100% Toy Story obsessed?  Our toddler son. I told him so. We ended up spending a lot of money to buy him new Toy Story merchandise, that sadly isn't even nearly as awesome as the older stuff that we used to own.  I've checked Ebay for some of the items that we used to own and they sell for a small fortune.  It seriously turns my stomach thinking about all the extra money we could've made off of some of our classic toys. 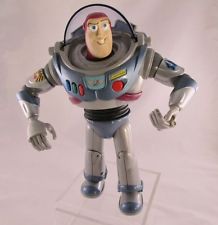 My 15 y/o son was also a Blue's Clues maniac.  This was years ago when the show was at it's peak of popularity as it was a new show at the time.  My ex and I bought this cute little house at Target for him when he was about 2 years old and I know we paid under $20 for it. 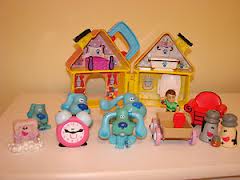 Picture found online
Guess who tossed it after I met him and we moved into our first place together? Yep, Mr. Urge to Purge.  Then guess who became totally, 100% Blues Clues crazy just a couple of years later when we had our first child together? Yep, the two of us birthed a Blue's Clues fanatic.  She was so Blue's Clues obsessed that it ended up being her party theme for her 2nd birthday.  By this time Blue's Clues merchandise was no longer sold in stores so I spent many hours scouring for toys on Ebay. I ended up finding the exact same house with all the figurines and paid $45 for the same, exact house that we owned just free and clear a couple of years prior.  I'm still pretty bitter over the whole thing. And even though my younger boys are not really fans of Blue's Clues. I refuse to get rid of the damn thing. I'm convinced that if I get rid of it, I will have a grandchild that will be the biggest Blue's Clues fan in the world and I will have to kick Mr. Urge to Purge in the shins for convincing me to toss it. We're keeping the damn house until the day we die!

We had quite the extensive collection of VHS movies.  I'm too embarrassed to give a ballpark number on how many we owned as it was a lot. One of the movies that my husband took to the Goodwill was this one: 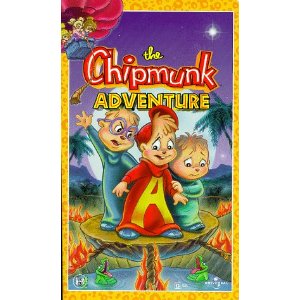 Picture found on Amazon
I told him not to take this movie, along with several others that are older movies and now very hard to find.  He didn't listen. Well guess who is now completely, 100% Chipmunk obsessed and is crying because he wants to rent "The Chipmunk Adventure" and it's no longer sold in stores?  Our almost 5 y/o son, that's who.  I looked online for the DVD version and it's being sold for an obscene amount of money.  There's no way in HE-double hockey sticks that i'm spending $75 for it! Luckily the VHS version is much more reasonable, and yes we still own one remaining, working VCR at this point, but it still pisses me off that i'm going to fork over another $10-20 for a VHS movie that we owned just one short year ago!  GAH!

These are just three small examples.  I could go on and on (and on) with many other similar examples.  I really do love Mr. Urge to Purge, despite my complaining.  I'm actually a little surprised that he hasn't tried to drop my crazy ass off at the Goodwill yet.
Posted by Peanutlayne at 12:32 PM