The weather is changing, the kids can't play outside as much, and that leaves mommy ready to pull out every single remaining strand of hair on her head. Sound familiar?  Well don't worry...i've got a solution! Make some play dough (do-do as my kids call it).  I know you're probably thinking, "No thanks, i'd rather just buy it."  Before you load your kids in the minivan and make a painfully expensive trip to Target, i'm here to tell you that you most likely already have everything you need to make some really awesome play dough right in your own pantry! Besides, store brand play dough sucks.  Don't get me wrong, it's squishy and fun the first few hours, but it quickly dries out and soon becomes a crumbled mess of crap.


This was after just a couple of hours of play:
I ended up having to toss it and the kids were upset 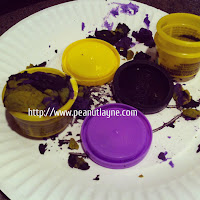 I promised the kids i'd attempt to make them homemade play dough like my mom used to do for me, but then I began to panic when I realized i'd actually have to pull this off.  I found a basic play dough recipe of my mom's, however, her recipe called for food coloring. I don't ever buy food coloring and I really didn't want to make a Sunday trip to the grocery store when I already had all of the other ingredients in my pantry.  So I started looking online for alternative ingredients for food coloring.  I found tons of recipes that said to use Kool Aid, but we don't buy that either.  However, I did have 2 boxes of flavored gelatin in my pantry and it looks a lot like Kool Aid so I figured "Why not give it a try? What's the worst that can happen?" That's a loaded question in this house...LOL!

I substituted one 3 oz package of cherry gelatin (generic Jello) for the food coloring and it turned out fabulous! The playdough smelled amazing and it had a very similar look to store bought Playdough but without the crumbly mess.  When my mom used to make play dough with food coloring, it was much duller in color, but with the gelatin it's very vibrant. 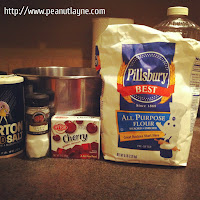 Directions:
Mix all of the ingredients in a large pan.  Cook on medium heat over the stove, stirring until the mixture hardens and becomes difficult to stir. You will know when this happens because your arm will start to hurt and you'll be wishing you just drove to the store and bought the d@mn play dough!  Don't give up though. When your arm starts to hurt when stirring, that probably means it's ready to remove from the heat.  Coat a cutting board with some flour and scoop your playdough out of the pan and onto the flour.  Knead dough in the flour, until the playdough isn't sticky anymore.  Be careful though because the play dough is HOT when you first take it out of the pan.  I burned my hands because I tried to knead the dough right away.  Oh and when your kids are done playing with the play dough for the day, make sure you store it in an airtight container and put it in the fridge. 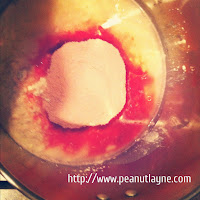 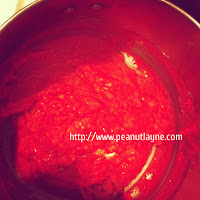 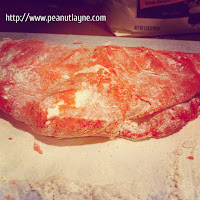 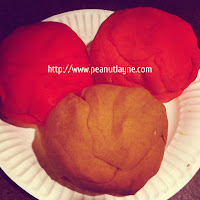 Tip: If you don't have gelatin at home, you can use spices instead!  Since I only had 2 boxes of gelatin on hand and ended up making 3 batches, for my third batch I actually used 2 tablespoons of paprika.  It turned the play dough a rich, sparkly brown color.   However, the kids weren't very impressed with the strong spicey smell, so I would suggest using a milder spice like cinnamon.  I don't know why I didn't think of cinnamon because i'm sure it would have ended up a similar color and smelled much better.   Seriously play around with what you've got at home as the possibilities are really endless.

You could make some orange play dough for Halloween by using some orange flavored gelatin. I'm planning on making green and red to put in my children's Christmas stockings.  The cinnamon spice would make a wonderful holiday scented play dough. This stuff also makes the perfect gift! You can find cute little inexpensive containers at the Dollar Tree, or cellophane bags and wrap it up all pretty and give it as a gift.   Birthday parties, party favors, stocking stuffers, party activities, etc, it all works. 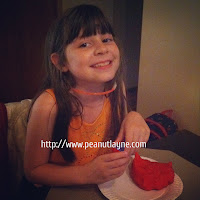 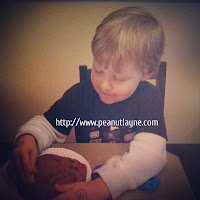 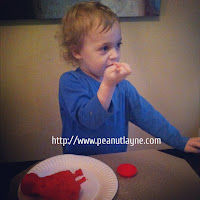 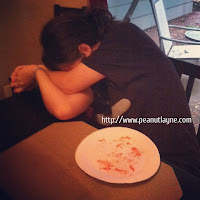 Warning!
This activity may be so enticing that your teenager might even appear out of their cave to come play with their younger siblings...GASP! However, they will hide their face when you try to take a picture for your blog.  Oh and you will most likely have to stop your 2 year old from eating it, as Peanut thought it was very tasty. Yes, that's him eating play dough with a fork.

Posted by Peanutlayne at 2:00 PM