Pinterest parent I am not, but I apparently gave birth to one

Please tell me when did it stop being cool to bring those little store bought Valentine cards to school? When did V-Day become a "I can create the most unique contraption to hold a heart shaped chocolate candy in the entire universe" day?  I'll tell you when….PINTEREST!

Now, not only are store bought cards uncool, but i'm seriously expected to spend my precious kid free evenings slaving over a hot stove cooking gluten free play dough that I then have to transform into hearts and package in an equally creative way? Or perhaps I should spend my time melting the multiple crayons that are stuffed inside of my filthy couch and make little crayon shaped cupids or hearts or better yet my hand flipping the middle finger!

When I was a kid everyone brought the store bought cards with popular TV inspired characters on them. Today they probably have Spongebob or that super barfy Dora the Explorer on them, but back in the day we had Snoopy, Ninja Turtles, Rainbow Brite and He-Man (because we were cool).  I don't know about you, but I turned into Inspector Gadget with my cards. I would take my gigantically awkward, heart-shaped card holder that was made in class a few days prior home, and then separate my cards into specific piles.  You know the piles…cards from close friends, cards from teachers, cards from boys (the most important pile), and then the rest of them. I would examine the cards from the boys with a fine tooth comb. If the cards had anything even semi-romantic on them, I was convinced that they wanted to marry me and have my future babies. Okay, i'm joking about the babies, but it's hilarious how I could twist and turn something as innocent as "You're neat" into "He loves me".  Yeah.

If you're one of those super crafty, Pinterester parents who can turn a piece of a broken beer bottle into a beautiful swan, then please don't take offense to this post. I'm secretly jealous of you. I am. I just miss the simpler days. The days when it was perfectly okay to send your kid to school with a store bought Spiderman card and that was enough. In fact, that was the norm!

Last night I was doing some shopping with the hubby and I realized it was the 11th and I started to panic a little.  It's totally our style to wait until the absolute last minute for everything, so I grabbed whatever box of store bought Valentine's were left on the nearly empty Walmart shelf.  I got home and handed them over to my 8 year old daughter, but to my surprise she looked at me and said, "I don't need these mom, I already made my own"


Holy poop. Did I give birth to a future Pinterester or what? 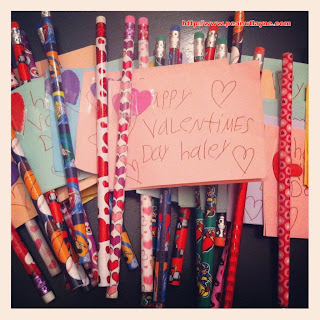 So, i've decided i'm returning my crappy store bought cards, and signing myself up for some artsy fartsy classes at Michael's so that someday when it's my future grandchild's first birthday, she will give me a more important role in the party planning other than, "Mom, why don't you just bring the Cheetos and we'll call it good."
Posted by Peanutlayne at 1:56 PM